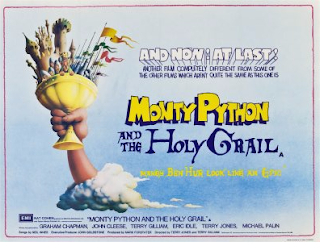 Other considered subtitles for this post: "FIN", "FINDING MY HOLY GRAIL", "ONE THOUSAND AND DONE!"

Well, this is it. No matter what I do in the future, this is the end of an era, right here. Again, I don't want to take away from this movie, so a forthcoming post will detail all of my gushing and prideful statements about finishing THE BOOK, but for now...we're off to Camelot. 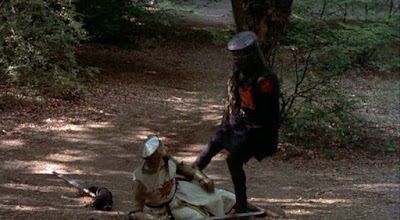 Again, outlining a plot here is almost silly, since I could basically just sum it all up in one sentence: The film is about King Arthur & his court and their attempt to locate the holy grail. End of story. In fact, a better way to write a review for Monty Python and the Holy Grail would probably just be to list some of my favorite lines, slap on a rating and call it a day. The first time I ever saw Monty Python and the Holy Grail, as I mentioned in my Life of Brian review, was when it was shown to me by my brother, who had it recorded on an old VHS tape. Going in, I knew nothing, except it was a comedy and as promised by my brother, a very funny one. The film started off with a gloomy hillside, a horse galloping in the distance - already unlike any comedy I'd ever known at that point. Soon, the "horse" shows himself to really just be two coconuts being clacked together and a grown man in a crown and sheath, with a beard, dressed up as King Arthur. I knew literally nothing and probably didn't get a lot of the jokes, but I remember laughing my head off at the scene with the black knight and the film had me at "your arm is off".

As also mentioned in my Life of Brian review, old favorites are hard to dethrone. There's something about revisiting a movie that you fell in love with at a young age. As I watched this, I was back in the old bedroom I once shared with my brother, our beds arranged in an L, ugly blue carpet on the floor and our little TV set that you had to get up to turn on. I saw so many great movies, for the first time, on that TV set - a set that would have to be included in my personal Smithsonian. Monty Python and the Holy Grail is an old favorite and I was really blind as to whether it held up or not. All I knew was that I enjoyed it again, I laughed, I remembered sharing laughter with my brother and this comedy has always been a good time at the movies. This TRUMPS Life of Brian, at least in my view. 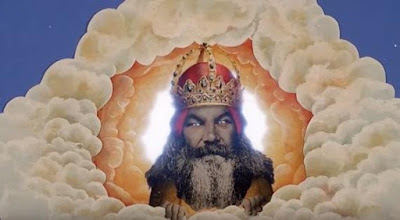 Today, I found my holy grail - I managed to finish watching all 1001 movies in the 1001 Movies You Must See Before You Die book and this was as good as anything to end it with. It was light, not serious at all, an old favorite that brought back memories and something I knew I liked. I'd have really hated to be ending my grand journey, dreading what I was watching. Seriously, if you haven't seen this, then it's a good thing I've really said nothing specific about the film, because I'd want you to go into it like I did - completely blind, knowing nothing about what you are about to see. Just be ready to laugh and if you don't get it, then you just don't get it - don't fret.

I feel like my mind is elsewhere right now. I can't stop thinking how unbelievable it is that I've just finished THE BOOK, something I wasn't sure I'd stick with in the beginning. I'm sorry for those of you who were looking for a really solid review of Holy Grail, but I just can't think of anything really intelligent to say about it. Comedies have always been hard to write about, let alone the one that is my final film from THE BOOK, when my mind is clearly not with a singular film, but rather the whole journey. In fact, if you were looking for a really solid review, then you kind of came to the wrong place, didn't you. I'm about 1 in 5 for solid reviews. 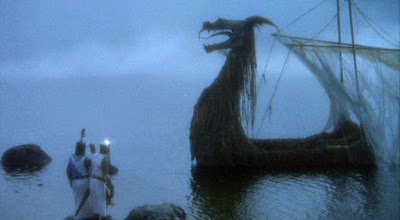 AND NOW....Some of my favorite quotes and yeah, some of them might not make sense as to why they're favorites, but these are some of the lines that always get me cracking up:

Brother Maynard: And Saint Attila raised the hand grenade up on high, saying, "O Lord, bless this thy hand grenade, that with it thou mayst blow thine enemies to tiny bits, in thy mercy." And the Lord did grin. And the people did feast upon the lambs, and sloths, and carp, and anchovies, and orangutans, and breakfast cereals, and fruit bats, and large chu...

You don't frighten us, English pig dogs. Go and boil your bottoms, you sons of a silly person. I blow my nose at you, so-called "Arthur King," you and all your silly English K-nig-hts

Wow, I totally JUST NOW got that K-nig-hts was meant to be the literal translation of knights. I always thought of it as "connigits" and figured it was some British insult that I didn't know about!

He was not in the least bit scared to be mashed into a pulp Or to have his eyes gouged out and his elbows broken To have his kneecaps split and his body burned away And his limbs all hacked and mangled, brave Sir Robin His head smashed in and his heart cut out And his liver removed and his bowels unplugged And his nostrils raped and his bottom burnt off And his penis...

Totally just heard the "nostrils raped" bit today and appropriately roared in hilarity. This is easily a film where I hear or see something new and funny that I didn't see the time before, every time I watch it.

There's a bunch of other stuff too that's to be looked forward to. All the black knight stuff, like I said, not to mention the conversation at the beginning about the swallows and little things, like the look on Eric Idle's face as he watches Prince Herbert shoot an arrow out the window. Priceless.

RATING: 7.5/10  It's a comedy, so a '7.5' is pretty much as good as a '10' in this case. I'll be back sometime this weekend with the final TOP 20 list and then after that, with a statement about my finishing of THE BOOK and details on where the blog goes from here. At this point, I'm not yet sure that it's completely sunk in that I'm done. I mean, six years is a long time to be working on anything and now it's all over. So let me let this sink in and maybe I'll have some more worthwhile words in a day or two.