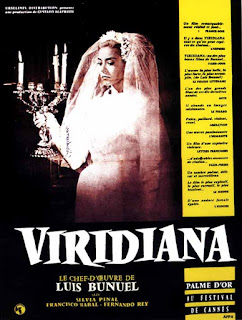 With only a handful of film left to go it's getting exciting now. Soon, my movie choices will not be prearranged, but will, instead, be what I want to watch! I've already added a handful of movies to the bottom of my Netflix queue to receive for when I'm finished. But I won't get ahead of myself - there's still thirteen more movies to see and fourteen more reviews to write...


On the day before she is to take her final vows and become a full fledged member of the convent, nun Viridiana (Pinal) is asked by her Mother Superior to visit her ailing uncle. Though she's never been close with him, she agrees at the insistence of her Mother Superior, if only to thank him for paying her way through the nunnery. Once she arrives, her uncle, Don Jaime (Rey) is astounded by the resemblance Viridiana bears to his late wife and almost immediately falls in love with her, keeping it concealed for the time being. Meanwhile, Viridiana isn't shy about telling Don Jaime what she thinks of him, calling him disgusting for abandoning his son when he was only child. One night, Don Jaime finds Viridiana sleepwalking and decides not to wake her, but instead gets an idea which he capitalizes on later. Fast forward to later and Don Jaime, with help from his maid, Ramona (Lozano), spikes a cup of tea intended for Viridiana, with plans to rape her in her sleep. However, Don Jaime comes to his senses while in the act and before he can corrupt Viridiana, he backs off. The next morning, Don Jaime comes clean, but Viridiana refuses to grant him forgiveness, instead returning to her convent. However, before she can return, she is caught up with at the station by a group of authorities who have some bad news for her.

We're actually not even scratching the surface there, but we'll leave it at that... 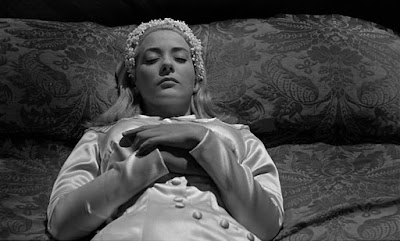 Man, what a disappointment this was! I guess I should preface this by saying two things: 1) I knew nothing about Viridiana going in and 2) Remember, I just watched Tristana (which I would give a mild thumbs up to) just a week or so ago. So the film starts out as something very special - a classic black & white affair, but with ideas and themes not usually explored in the golden age of film and certainly ideas that you don't tend to get when you think of an old, black & white picture. We start out with a great template for a film: niece goes to visit her estranged uncle and uncle falls in love with her, since she bears an uncanny resemblance to his dead wife. You throw in the whole sleepwalking deal and you have the grounds for what could be a spectacular film. Hey, I'm not into the whole incest deal or anything, but as a theme to explore on film - why not? - as it's mostly uncharted territory when it comes to story ideas - at least as far as I'm concerned. So I'm digging the film well enough and it's reminding me of an even edgier Tristana and one that was made eight years prior, no less. And then, it all ends abruptly and it's as if the whole movie restarts from the beginning with an entirely new idea. WTF!?

From this point - which is probably at around the thirty - forty minute mark, the film turns into a story about Viridiana opening up her uncle's home as a shelter for the poor & unfortunate. And don't think we eventually get more of the Uncle Don Jaime story, as he's almost never mentioned again for the duration of the film, as the film completely switches gears. What's the deal? I feel like Bunuel (of all people) could've made a piece of erotic fiction that dealt heavily with themes of incest, perhaps even intermingling themes of worship with Viridiana acting as a Christ-like figure for Don Jaime, who sees her as such, since he views her as his wife resurrected. So then you get Viridiana becoming a false idol and Don Jaime becoming like Viridiana, once the worshipper, now the worshipped. Throw in the maid and her bratty, little daughter and do something with the sleepwalking bit and I think you have yourself a hell of a movie. But that's all a pipe dream, as that's not what goes down here, at all - as you who have crossed the spoiler barricade know. 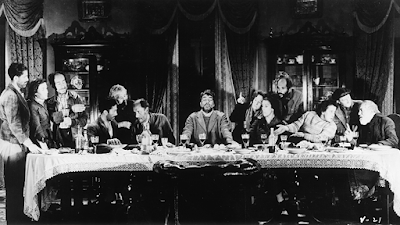 Actually, I kept thinking Don Jaime was faking his death. The scene right before Viridiana is informed of his death, we see Don Jaime sitting at a desk, seemingly getting an idea and then pulling out a piece of paper and a pen. We think he's scheming of how to get Viridiana back, but we soon find out that wasn't the case. In fact, we never even find out what he wrote in the letter. And in case you haven't figured it out by now, I really hated the second half of the film, with the beggars coming to live at the house and the introduction of Don Jaime's son. It was all too muddled and seemed to be throwing out messages that I wasn't picking up on, most notably in a scene that seems to resemble, to a tee, the last supper. Okay, okay so maybe it wasn't ALL bad, as I sort of liked the aspect that Viridiana set out to create a house of the holy and instead, ended up creating a den of sinners. It's almost as if Viridiana is God, the house is the Earth and what starts out as good intentions, ends up being a travesty, with more sinners being produced that genuinely good people. Definitely some food for thought here, not just from half one, but also half two - two completely different flavors of food for thought, for sure. I will say this, though: After watching Viridiana, one has to wonder if Bunuel had some incestuous fantasies that went unexplored or even had a strong maid figure in his home as a child. This would actually work well as a double feature with Tristana.

RATING: 6.5/10  I have to give it credit, because before they killed off Fernando Rey, I was really liking this. As I said above, I've added a handful of movies to my Netflix queue with Bunuel's That Obscure Object of Desire being one of them.