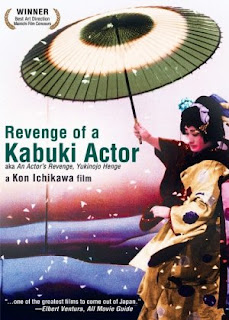 AND THEN THERE WERE TWENTY...

It's getting nittier and gritter around these parts. One more movie ticked off, only twenty left to tick. To put it in perspective, when I watched my 20th movie, way back in October of 2009, I had only seen silent movies for THE BOOK at that point and had just watched my first Buster Keaton film. That seems like a long time ago. Anyway...

Can't get too deep into plot detail here, as I mentally checked out of this one after about twenty minutes. Yeah, I know. I guess I'll go ahead and take the blame for not liking it, even though it was a bit too confusing for what it should've been. An Actor's Revenge tells the tale of a kabuki actor who seeks revenge on two men who drove his father to madness, causing him to eventually hang himself and leave the actor an orphan. The actor is Yukinojo Nakamura (Hasegawa) and when onstage, he plays a woman. In fact, he dresses as a woman all the time, as we never see him not in his full geisha regalia. Anyway, I don't think they ever tell how the two men drove the father mad, but they drove him mad dammit, and that's enough! They probably did say why, I just couldn't be bothered to pay enough attention to find out the motivations of characters that were as far from engaging as they could possibly be, bordering on alienating. Call this a culture clash of the highest degree. Anyway, Yukinojo plots and plans throughout the film, not wanting to settle for simple, quick death, but instead wanting to torture the men. One of the men whom Yukinojo seeks vengeance on also has a daughter who gets mixed up in the whole mess. Seriously at this point, I'm plum out of anything further to tell you regarding the plot.

Man, this was brutal, although I will admit it was a pretty stylish movie, with some decent camerawork. If you're someone who can watch a movie and admire the aesthetic aspects by themselves, then you may dig this. I'm a man who needs a meaty plot and unfortunately, An Actor's Revenge left me a vegetarian for a couple of hours. Also, and I know this is not the fault of the filmmaker's, but the subtitles were ridiculously hard to keep up with at times. There was one point where there were two sets of subtitles, one on the top of the screen and another set on the bottom - one was reading the spoken dialogue, while the other dictated thoughts coming out of Yukinojo's head. Just a minor quibble, but a quibble nonetheless. I just couldn't ease into this, bottom line. The score was also pretty smooth, however it just didn't seem to match up with the action onscreen and it made for a film that just felt really odd all around - perhaps that was the intent.

RATING: 3.5/10  I feel like a '4' is just a notch below average and that a '3' is too far below average for something that WAS stylish, had nice camerawork, a decent score and such an overall, odd presence. Still though, this was a tough watch.