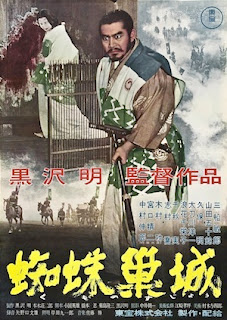 Finally, finally something GOOD comes down the pike, as I near the end of my project and not just something good, but something I wouldn't hesitate to call great. I've never been a staunch Kurosawa supporter, but I may have to take up his praise. 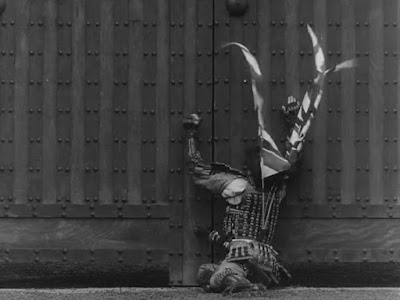 The story is apparently an adaptation of Shakespeare's Macbeth, but since I'm a Shakespeare virgin, that means nothing to me. The film is set in feudal Japan and is filled with samurai. We begin with the attack on the kingdom of Great Lord Tsuzuki (Sasaki). He is first given the news that his fourth and fifth fortresses have burned and that his first, second and third fortresses are under severe attack. As the news keeps coming in, it keeps getting better and better, ultimately ending with a report that General Washizu (Mifune) of Fortress One and General Miki (Chiaki) of Fortress Two have mounted a comeback, fighting back and winning the battle, thus saving the kingdom from defeat. Lord Tsuzuki calls for the two great Generals to come to him, following the news of their gallantry. While riding to Spider's Web Castle (Lord Tsuzuki's residence), the two Generals get lost in the woods and are visited by a spirit, who tells them that in the future, General Washizu will command first, the North Garrison and then become Great Lord of Spider's Web Castle. He tells General Miki that he will become General of the first fortress and that his son will go on to become the Great Lord of Spider's Web Castle. The Generals laugh about the prophecy at first, but upon meeting with their Great Lord, they realize that the words of the spirit are already coming true - the Great Lord naming Washizu commander of North Garrison and Miki commander of the first fortress. Enter Lady Asaji (Yamada), Washizu's wife, who fills his head with paranoia, prompting him to murder the Great Lord and take his place as Great Lord of the kingdom. This, of course, sets into motion even more deceit, uprising, war and bloodshed, in this great classic from Akira Kurosawa. 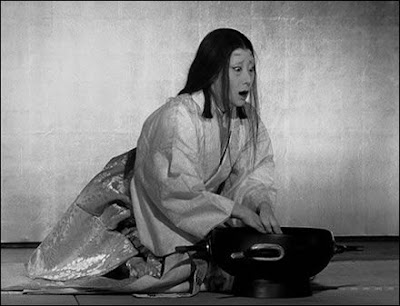 There's really not much to dislike here. Sure, words & phrases like "feudal Japan", "Shakespeare" and "Macbeth" may be intimidating to your casual movie goer and were certainly intimidating to me, a frequent movie goer, however, Kurosawa takes the story and makes it fun and very watchable. I have to wonder how many great stories I'm missing out on by not reading Shakespeare. Sorry, folks, all those "thous" and "thees" are not for this reviewer. If only director's in the vain of Kurosawa could tell me every story that I find bland, perhaps I'd be more open minded. Plot wise, one has to wonder if the prophecies would have come true if the spirit had kept his mouth shut. With no knowledge that he'd become Great Lord, would Washizu's wife have urged him to speed up his ascension to the throne? Surely, he wouldn't have killed Miki, thus Miki's son would have had no reason to begin an uprising on the Washizu kingdom. Therefore, maybe the spirit wasn't a spirit at all, just a mischevious old man who knew that stirring the pot could only lead to more mischief. An even further perhaps and maybe we can conclude that the spirit is the Devil himself - not so much telling the future, but just causing trouble.

I actually love the title - which with the mere mention brings to mind this kingdom that will forever be shadowed in a great bloodshed. The ending scene with the bevy of arrows flying at Washizu is a pretty much the only thing I remembered from my previous viewing of Throne of Blood, which was something like eight years ago. And why wouldn't the ending be the only thing I remember, as it's pretty great. We get Washizu both losing his mind and his life in a matter of minutes, as he can't take the thought that the trees are rising up to attack and certainly can't bear the arrows that are spearing their way through his innards. Seriously, that arrow that gets him through the neck, made me GASP - as if I myself had been shot. 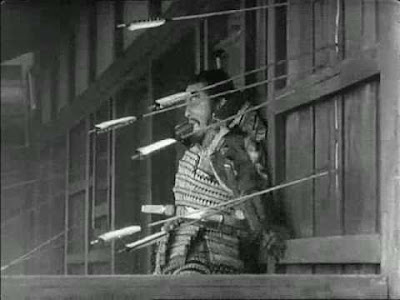 Like I said, this is REALLY a hard one to hate. It's a rotund story, where the director just lays it out for us piece by piece. There's nothing confusing and while the Shakespeare stuff may be off putting to some, it seems as if Kurosawa knew that and was extra careful to make sure no one got bored. We're given each piece, along with all the information we need to keep the story moving along nicely and I'd say this film is the perfect length to boot, as anything longer COULD have been borderline overkill. Having said that, a part of me wishes this had been as epic as Seven Samurai, as I was really enjoying myself. To the Kurosawa lovers out there, I don't see 100% eye to eye with you, as I very much disliked Dersu Uzala and found other classics of his, namely Ikiru, Seven Samurai and Rashomon, to be more disappointing than good. However, both this and RAN were more than enough to make me want to see the rest of his filmography, post BOOK.

RATING: 8/10  Maybe it just took a night away from THE BOOK to get me to fall in love with the project all over again. When I saw this last, eight years ago, I didn't like it. Thanks to THE BOOK, I revisited and to success.