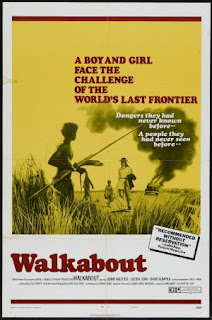 As is clearly the case, I've saved all of the aborigine - notably David Gulpilil - films for the end of my journey! Why? I have no reason. In all seriousness though, I think I'm starting to suffer from serious didgeridoo overdoses.

Right off the bat, this film is straight up odd and I'll get into why in a little bit. It's director is Nicholas Roeg, whom BOOK doers may remember from his work on Performance and The Man Who Fell to Earth. We start out in an Australian city, where a family (dad, mom, daughter, son) lives in a high rise apartment building, seemingly very contentedly. Actually, that's a lie, as we barely get a glimpse at their life before the shit hits the fan. One day, the father drives the son and daughter out into the middle of nowhere, seemingly for a picnic. When the son goes to play with his toys and the daughter begins to set up the feast, daddy apparently loses his mind and begins shooting at his children. The daughter, perceived to be sixteen-years-old (but played by the nineteen-year-old Agutter) realizes what's happening and gets her much younger brother to safety. Once the kids disappear, the father sets the car on fire and shoots himself. However, now the kids are stranded in the middle of nowhere, with no way to get back to civilization. They wander for a while, eventually finding a fruit tree, which looms over a natural water source and there they wash up, fill their bellies and drink. When they awake the next morning, however, the fruit has all been eaten by birds and the water has dried up into the ground. It is around this time that an aborigine (Gulpilil), on his ritual walkabout, happens upon them and, despite not speaking English, shows them the lay of the land. Yada, yada, yada, more stuff happens, but we're bordering on spoilage here. 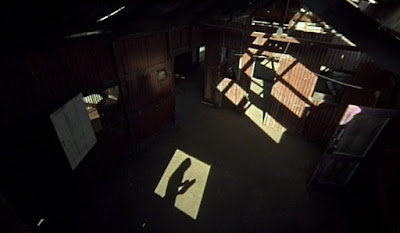 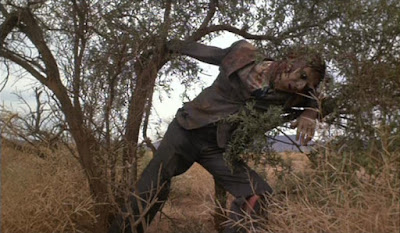 I'm kind of proud of myself, as the BOOK has really taught me a lot about film and how to notice different filmmaker's, simply by watching their movies and picking up on little characteristics. I kid you not, there was a point in this film where I actually thought of The Man Who Fell to Earth and until I just looked it up, prior to starting the review, I didn't know Walkabout was directed by Roeg. It was that erratic editing and the way Roeg cast a certain light on strange characters (Bowie's Newton and Gulpilil's aborigine) that made me think that perhaps he was the culprit behind Walkabout. And I was right! Honestly, I didn't (and still don't) know what to make of this movie. Despite being straightforward with it's plot, the motivations and the overall feel were just flat out odd. What was with the graphic killings of all the animals? Was all of that really necessary? Why did daddy go berserk? Why did the aborigine go berserk? What was with the end and what was the final answer to the whole film? So many unanswered questions and of course, THE BOOK takes the cop out that "not all questions have answers". I call bullshit.

It was at about the thirty minute mark that I had to take a pause and look up to see if it was okay that Jenny Agutter's skirt was too short. I sigh of relief to realize that she was nineteen when the film was made. I'm sorry, did that just make me sound like a total pervert? Even more pervert thoughts incoming: Did anyone else notice the EXTREME sexual tension between Agutter and Gulpilil's characters? Am I crazy on this one? There was one point where the little boy says something like "why can't he where my shirt" referring to the aborigine, to which Agutter replies, after sneaking a peek at his loin cloth, "it wouldn't fit him". As if to say - "He's clearly a MAN and you're clearly a boy, so don't be ridiculous". In fact, I'm pretty sure I'm not alone in thinking there was serious sexual tension, as THE BOOK even hints that the original source material had the girl and the aborigine engaging in sexual acts. 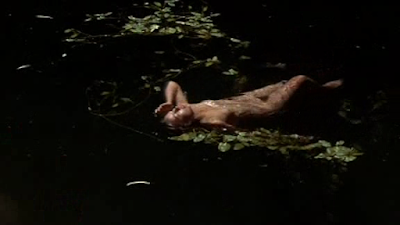 When it was all said and done, I think I was intrigued enough to, at least, say that I liked it, but turned off enough to say that I can't consider it a favorite or anything. Perhaps after a day or two to digest it, I'll come around, but for now I'd tell you to approach Walkabout with caution and don't go in expecting too much or even expecting answers to what you get. While the plot is pretty straightforward (boy & girl lost in the woods), there's still so much whirling around that is baffling and borderline off putting. The editing is erratic and while this is Roeg's most engaging film since Don't Look Now, I'd put it closer to The Man Who Fell to Earth or Performance on the quality scale, although clearly better than both of those - even if only for the top notch cinematography, which I don't remember previous Roeg movies featuring. Definitely one to keep in the corner of my mind for a few days, perhaps even take a perusing at the IMDB message boards and get some more ideas into the psyche of the movie.

RATING: 6/10  Does anyone else remember this film being discussed on the show Coupling, notably Jenny Agutter's appearance. Man, I loved that show!