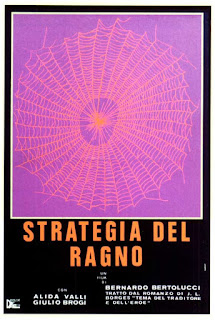 OH WHAT A TANGLED WEB WE WEAVE

Moving right along. It was only hours ago that I wrote my review for The Searchers and I immediately hit the bed and put on another movie. I think it's time to wrap this journey up and I'm willing and ready to put in some serious overtime to get the job done. 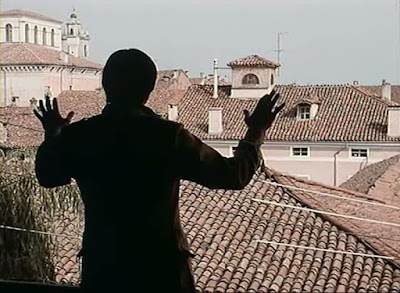 The Spider's Stratagem is the fourth film I've watched from Bernardo Bertolucci and begins with a young man, Athos Magnani (Brogi), returning to the hometown of his father, Tara, after many years. In fact, Magnani never met his father, as his mother was still pregnant at the time of his father's death. His father was also named Athos Magnani and was an anti-fascist, who rebelled against Mussolini and the regime of Fascism that swept over Italy in the early 1900s. For his rebellious behavior, Athos Magnani was murdered, while at the theater and thus became a hero - having statues built in his honor. In flashbacks, we learn that the elder Athos had three close friends who were also anti-fascists and prior to Athos' assassination, the foursome plotted to kill Mussolini. Coincidentally, the plot to kill Mussolini was the exact same as the way Athos was assassinated - in a theater, while watching Rigoletto. The young Athos, in present day, talks with the friends of his father, as well as his father's mistress, Draifa (Valli) and tries to get to the truth about his father's murder, narrowing it down to realize that it was a Tara local. 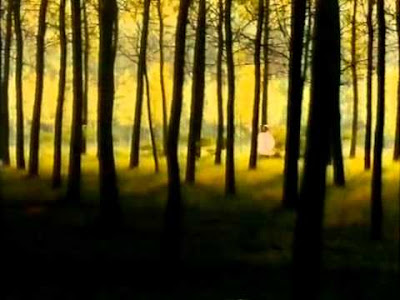 Like I said, this was my fourth Bertolucci film and I'm not gonna' lie, I had to go back and look it up to make sure I'd watched three and to even refresh my memory as to what those three were. The three prior Bertolucci's were: 1900, The Conformist & Last Tango in Paris and honestly, all of those films had memorable qualities, with "Last Tango" being the best of the trio. Now having watched a fourth I can definitively say that I wouldn't be opposed to seeing more from Bernardo Bertolucci and in fact, there is still one more of his to do from THE BOOK - Before the Revolution. THE BOOK compares The Spider's Stratagem to the films of Alain Resnais and Michelangelo Antonioni, calling it very confusing, non-linear and even saying "it's nearly impossible to keep track of time and/or place, and viewers are left with an overall impression of uncertainty". Umm...I couldn't disagree more. Sure, I was baffled by the films of Antonioni and Resnais, having more questions with those two directors than answers. However, I felt like I understood The Spider's Stratagem completely, except for maybe one or two unanswered questions, yet the overall puzzle was clearly visible.

In case anyone reading this has any questions as to what was going on here, the following is my interpretation:

Athos Magnani, the younger, returns to the town of Tara where his father was murdered and after meeting with his father's former mistress, decides that he should set out to find out who killed his dad. She convinces him that the killer must be a local man from Tara and informs him that Athos' had three friends: Costa, Garibazzi and Rasori and only one known enemy, a landowner named Beccaccia. Of course, young Athos goes to talk to Beccaccia - is first kicked out by his henchman - but later, during a meeting Beccaccia tells him that although he'd love to take credit for Athos' murder, he didn't do it. It becomes apparent early on, at least to me, that there's a chance his three friends had SOMETHING to do with his assassination, but young Athos doesn't realize this right away. We learn in flashbacks that the original plan was for Athos and friends to kill Mussolini, with a bomb in the theater. However, Mussolini didn't show up to the theater on the night of the attack, so their plans fell through. Then LATER, we learn that the reason Mussolini didn't show up was because Athos tipped off the authorities and told them that if Mussolini did show up, he'd be killed. His three friends find out about this and are furious, of course. However, instead of murdering him for being a traitor, the foursome concoct one final plan: to murder him as a hero. The fact that Athos tipped off the authorities is covered up & Athos is murdered by his friends and everyone assumes he was murdered as retaliation for being an anti-fascist - thus making him a hero.

In fact, the only question that I didn't get answered was WHY did Athos tip off the authorities to the Mussolini plot? If his wish was to defame the fascists anyway by dying a hero, thus glorifying the rebellion, why not just go through with the plot to kill Mussolini and take the fascists down a further notch than his hero death would have? Otherwise, I feel like I understood everything. Maybe I'm wrong, maybe I'm completely off base and what I've just stated above is 100% wrong, but I don't think so. Also, what was the deal with the little boy? Was it actually a little girl? or just a very effeminate male? Who knows. Bottom line: This wasn't bad at all. Like my review for The Searchers earlier, I wouldn't go so far as to call it great or anything, but BOOK doers don't dread this one. A perfectly enjoyable hour and change at the movies.

RATING: 6.5/10  I'm actually looking forward to Before the Revolution now and I'd say that I need to watch it sooner, rather than later, but I'm nearly done so everything will be watched sooner.