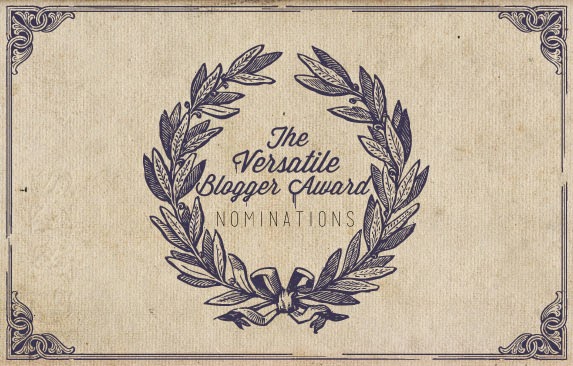 Isn't it something when people FAR more talented than you recognize you for a job well done? Well, that's exactly what's happened here as Karen Burroughs Hansberry of Shadows & Satin - a FANTASTIC blog that you NEED to be reading and bookmarking - passed along to me the Versatile Blogger Award. A big thank you to Karen and please, do check her out on the interwebs, be it at her blog or on Twitter @TheDarkPages. She's one of the coolest people you'll want to meet and she knows her stuff when it comes to movies, especially noirs and pre-codes.

As with all of these awards acceptances, there comes a set of rules and for this one, they are:

1. Thank your nominator and provide a link to their blog. (check)

2. Make your own fifteen nominations and tell them they've been nominated.

3. Offer up seven interesting facts about yourself.

Let's start with the facts and then we'll get into the other nominees (do I even know fifteen other bloggers? Yikes!)

Trust me, I'm just not that interesting of a guy, so these are probably all things I've talked about before, but I'll try my best to spruce them up a bit.

1. I have been married for seven years now (June 21, 2007). I was married on a Thursday morning in Morgantown, WV at the courthouse and the only two people who knew about it, for the longest time, was me, my wife, the judge who married us and two court appointed witnesses who were present. I met my wife online in July 2006 and after talking to each other every single day on the phone for over ten months, we finally met on Memorial Day 2007. It was probably the most nervous I've been in my life, waiting for her to pull up, meeting her for the first time. Do any of you watch Catfish? Well I knew what my fish looked like, as we'd previously video chatted, but it was still stomach in your throat type stuff, I promise you. I love that show and really feel for those people when they're walking up to those doors.


2. I recently heard someone say, "No one is dumb enough to start smoking past the age of eighteen". Well, I did. I started smoking on Christmas Eve 2005, about six months after I turned twenty-one. I was out & about with my brother. We'd done our annual visit to my grandma's house and were back at my parents house (where I still lived and he didn't). His girlfriend at the time usually worked the holidays, so instead of going home to sit alone, he offered me a free ride in his PT Cruiser and I accepted. We cruised town and at one point, I began expressing an interest in smoking. I honestly didn't know why I wanted to, but I did. I didn't have a license at the time, so he scored me a pack of Camels and we pulled into a parking lot for me to try my first one. I coughed a bit and wasn't sure what I thought. Eventually, Joe Camel and I were inseparable and I was hooked. I smoked until the age of twenty-eight, when last year I finally kicked the habit, cold turkey. I still crave one here & there, but ultimately decide that my grouchiness during those first few months wasn't worth having to live through again and more importantly, putting my wife through again.

3. I was recently promoted to supervisor at WalMart. I know, I know - WalMart, BOO! For reasons I really don't know a lot of people knock WalMart (is it our lack of unions?), but I can hardly say a bad word against them, as they've been paying my bills for the past four years. You know that old cliche, "hard work pays off"? Well, until last month, as far as I was concerned that was just a cliche. But I'm here to tell you, that if you work hard eventually SOMEONE will recognize you and hopefully reward you. I busted my butt at WalMart for four long years always treating my job with importance and making sure I earned every dollar that lined my pockets and when a supervisor spot came available, I applied and was finally recognized for my dedication. I hate to sound like a sap and I know it's just WalMart, but I'm proud of that job and where I am in that company.

4. More about my wife? Okay. Every year my wife and I go to the park where we spent the day after that initial Memorial Day 2007 meeting. On that day, we'd just spent the night together for the first time and were preparing to say our goodbyes. During our first meeting, she could only stay the night before returning five hours down the road to her home in Ohio (I lived in Pennsylvania). Anyway, we went to this park and just walked around and before we left I asked if I could snap a picture of the two of us. We sat on a rounded wall and I put one arm around her while holding out the other one, camera in hand. I snapped us both with one of those throw away cameras and hoped I hadn't cropped either of us out of the shot. Now, every year we go back, sit on that same rounded wall and snap the same pose. I can hear you all "awwwwing" from here.


5. When I was a kid, I would spend my summer vacations staying up all night, binging on Nick-At-Nite. So, here's the story. When I was young, my parents never really cared when I went to bed, as long as I didn't give my mom any guff when she tried to get me up for school. And when the summer's came, they really didn't care. So, I'd spend the first week getting into my new sleep schedule, staying up as late as I could and then sleeping the day away. By the second week, I was into graveyard shift mode and I'd last until about 10am before finally passing out, sleeping until dinner time and then doing it all over again. Honestly, it sounds awful now that I'm typing it out, but I loved those days and I think I can thank those old shows on Nick-At-Nite for giving me a higher tolerance for old movies, which I eventually would come to love. The best Nick-At-Nite lineup was as follows: Taxi, The Dick Van Dyke Show, The Mary Tyler Moore Show, The Bob Newhart Show, I Love Lucy, The Lucy-Desi Comedy Hour, Rhoda and Happy Days. Occasionally they'd also play Phyllis, a spin off of The Mary Tyler Moore Show, which as also good, but I think it was only on Sunday mornings or something. I still adore all of those shows, by the way.

6. When I take my hiatuses, I'm can usually be found watching professional wrestling. I know, I know, but I love it and I have ever since I was a child. No, I don't think it's real and no, I'm not one of those ding bats who wears the t-shirts and acts a fool. In fact, I don't even watch WWE programming (the major leagues of professional wrestling). What I enjoy most is an independent company known as Ring of Honor, with a bunch of pro wrestlers you've probably never heard of. Think of it as the minor leagues for the WWE, just with no affiliation. I actually go to attend my first ROH show last May, my send this past January and will be going to my third this September. It's just so much fun. My wife and I go (she's a fan too), always sit ringside and scream our heads off, chanting and banging the steel plates that they hang over the guardrails. The first show we went to, we came home with bruised hands and could barely hold our fists together for a week. Wrestling was a huge part of my childhood (it consumed it) and I will ALWAYS love it.

7. It's nearly midnight as I write this and I can't think of anything else, so instead I'll just share a couple of recent pictures of me, from my recent trip to Ohio:

Here goes nothing. These are really all fantastic blogs and you owe it to yourself to go and check them out:

6. The Man on the Flying Trapeze

9. A Mythical Monkey Writes About the Movies

10. Tales of the Easily Distracted

I literally don't know any other bloggers, so that's all I can do. Which leads me to my next point:

If you're a blogger and you wanna be featured on my BlogRoll! just drop me a line. I'd kind of like the blog to be movie, music or television related, as that's what my blog revolves around. Anyway, let me know and I'll more than likely hook you up with some pluggage.

Thanks again to the wonderful, the talented and the extremely awesome Karen Burroughs Hansberry. Please visit Shadows and Satin and pay your respects to someone far more talented than myself. Also, don't forget to check the sidebar for a link to The Dark Pages newsletter, a great publication that yours truly has even written for. Great stuff all around from a great lady. Thanks Karen!