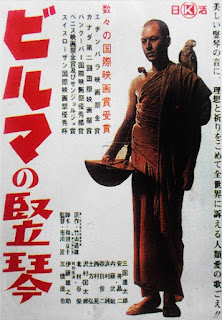 Here I sit for the 972nd time, about to grace you with a perfectly mediocre review (at best), as I've dragged myself from the warm confines of my bed to my faux leather desk chair which has exactly zero warmth. And again, as has been the case for many reviews past, I have a raging cold. I feel like straight up poop, to be honest. But, it is my goal to wrap this journey up sooner, rather than later, so let's have at it. 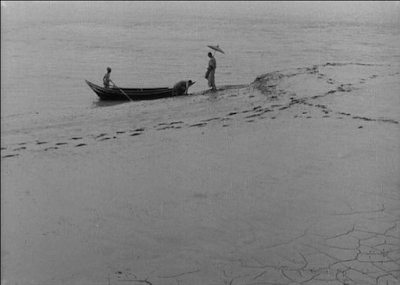 The setting is World War II and the location is Burma. We focus on a brigade of Japanese soldiers, wandering the rough terrain of a foreign land, during the last days of the great war. This platoon of soldiers is a bit different, though. Not only are they brothers in arms, they are also brothers in song, as their captain has taught them to sing, to pass time on long foot hauls. In fact, one of the group, Mizushima (Yasui) can even play the harp and has even made up a couple of songs, titled "Danger" and "All Clear", so that he can go on ahead and signal the rest of the group with the appropriate tune. Anyway, the platoon is informed that the war is over, that they've lost and they prepare to return home to a war torn Japan. However, they hear tell of a group of Japanese who are refusing to surrender. Not wanting anyone to die an unnecessary death, they decide to send one of themselves to go and talk the rogue Japanese off of a mountain. Mizushima is chosen and he goes. Once there, he is told by the British that he has only thirty minutes to talk the Japanese platoon down, or they will open heavy fire. Mizushima scales the mountain, but cannot convince the platoon to give up, thus forcing the British to attack. Mizushima is caught in the crossfire and is thought dead. However, we quickly learn different. Despite the fact that the audience knows the truth, Mizushima's friends do not and spend the rest of the film chasing rumors of Mizushima being alive, that may or may not be true. 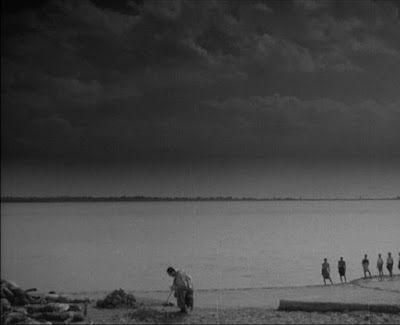 So was Mizushima an actual soldier or was he more like a mascot for the group? I don't mean to sound disrespectful here. I know back in the day, platoons of soldiers actually had musicians that traveled with them and played horns & such and that's how I viewed Mizushima. That is, until about the halfway mark when I realized he might actually be a soldier, as only a soldier would understand the plight of his fellow soldiers, the senseless deaths, the heartache of unhonored, unburied bodies lying on beaches. I think I need to quit saying, "I don't like films about history", as clearly it's hit or miss, just like any other movie. This is clearly a historical film, using World War II as a back drop and focusing on the Japan side, which we rarely get in movies or I've rarely seen, anyway.

Man, what a heartbreaking film this was. To be honest, I kind of went in not expecting much, probably because THE BOOK hasn't been giving me much as of late. Looking at the list of movies that are left, there really aren't many that I'm actually looking forward to, so blame it on me going into The Burmese Harp with low expectations and expecting to have a rotten time. However, I quickly took notice when the scope of Ichikawa's camera and the music of the choreographer grabbed hold of me and forced me to show some sort of emotion. No joke, this movie was very ahead of it's time and could easily be remade today with very little alterations. I still can't believe how powerful the music was, such somber, gripping notes that played on through the majority of the film. You also have to admire the dedication to friendship of these characters, the ones looking for Mizushima. Could this be one of the greatest movies about true friendship ever made?

We get down to having sixteen minutes left and the gang meets up with Mizushima and I'm wondering how this can be because we're not quite done and this should be the ending. Anyone who's read my reviews knows that I'm a sucker for a sad ending, but this was a rare case where I wished for happiness for these characters, who took on a life outside of the one they lead onscreen. However, the ending was still pretty gut wrenching and the letter read by the captain to the rest of the platoon is the final sad scene, in a series of sadness. I'm not saying it was the best thing I've seen all season or anything, but it was certainly a breath of fresh air compared to the lackluster offering I've sat through lately. I now have one film from the final twenty-nine to look forward to and that would be Ichikawa's final film, An Actor's Revenge.

RATING: 7/10  We'll go as high as that for now, with an option to up it in hindsight and upon further viewings. A definite candidate for, at least, the upcoming TEN WORTH MENTIONING list. Now where's my bed...