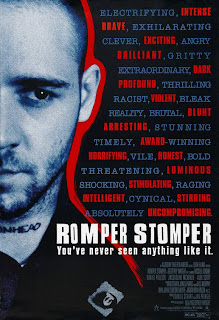 FINE LINE BETWEEN LOVE AND HATE

Before Russell Crowe became a Hollywood mega-star, he had a flourishing acting career Down Under, especially with the release of "Romper Stomper", where he plays neo-Nazi skinhead, Hando. 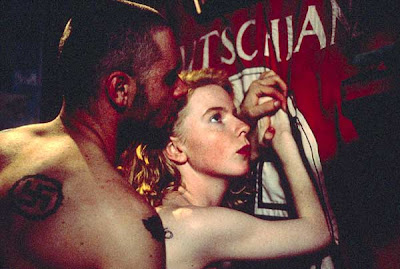 The film follows a gang of neo-Nazi skinheads and begins with them violently attacking two Vietnamese teenagers in a subway tunnel. From there, we follow the gang as they hangout at their favorite pub. It is there that Hando (Crowe), the leader of the gang, meets Gabrielle (McKenzie), a drug addict and troubled girl with a sexually abusive father. Without much discussion, Gabrielle makes her way into the skinhead clique and forms a relationship with Hando. Later, the owner of the pub where the skinheads like to hangout sells the business to a group of Vietnamese and when the gang find out, Hando is alerted and war is declared. A turf war is instigated and in fact, the Vietnamese outnumber the skinheads and several members of each gang are killed. The skinheads are ran out of their hideout and are forced to take refuge in an old warehouse. As tensions rise, Hando's aggression toward the other gang members and especially Gabrielle heighten. Meanwhile, Hando's second in command, Davey (Pollock) forms his own bond with Gabrielle. 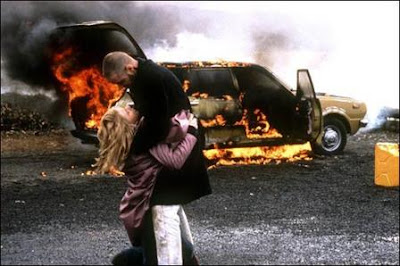 There's not a lot of bad in "Romper Stomper", so let me rant for just a moment and then I'll segue into the good stuff. For the most part, the major downfall here is the lack of details and development in the script. You have a feature length, ninety minute film and the whole story hinges on the big brawl between the skinheads and the Vietnamese, midway through the film. Prior to that they spend the first half introducing the characters and laying the groundwork for the second half, establishing Hando as the alpha male and establishing the budding romance that will come later between Gabrielle and Davey. It's a tough first half, but if you stick it out you'll be rewarded handsomely. 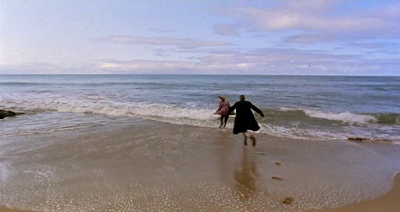 Apart from that the rest of the film is a fairly enjoyable time at the movies. Erratic editing and standout acting work to elevate this film to an upper echelon. Once you hit the second act, you get great scenes involving the gang invading Gabrielle's father's home and of course, the magnificent climax, which takes place on a beach and is riveting! It only took Hollywood three years before the brought Russell Crowe in (when he played opposite Gene Hackman and Leonardo DiCaprio in "The Quick and the Dead") and the rest is history. THE BOOK also makes note that the film is neither pro or anti racism, but notes that in time that answer has become more clear. I disagree. I think that on the issue of whether or not this film is pro or anti racism isn't clear and actually, I like it that way. "Romper Stomper" doesn't choose sides, it simply presents us with an ugly slice of life and allows us to observe and judge for ourselves, based on our own views. Personally, the film and more specifically the characters disgusted me, but that can only be a credit to the wonderful portrayal.

RATING: 7/10  Don't go looking for this one on Netflix cinephile's, because it's not there. No, if you want to check this out, head on over to YouTube, because it's currently there in six parts.

Note: For anyone who cares or for myself, when I look back on these posts and wonder what the hell happened, I have a quick note. My ORIGINAL plan called for me to watch one more film before heading into the "Malle Hat Trick" (a three film tribute to Louis Malle) and then following that with "Manhunter" and then "The Silence of the Lambs". That would've taken us through to #50 for the season, with "The Silence of the Lambs" being #50. However, I have Monday, Tuesday and Wednesday off from work this week and planned to blitzkrieg through a nice chunk of filmage. Furthermore, with Columbus Day falling on Monday, I'm not going to get anymore Netflix movies until Wednesday, therefore certain movies may be pushed back further, so that I may spend my three days off watching as much as I can, whether it be from YouTube or the streaming portion of Netflix. If at all possible, however, I will stick to my original plans. That is all.