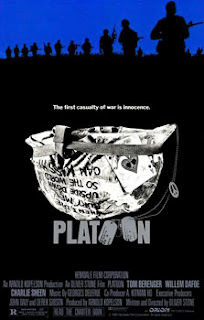 Oliver Stone began directing films in 1974, with the release of "Seizure", which he also wrote. However, it wasn't until 1986 and the release of "Platoon" that he started to get recognized as a big time director. Since then he's churned out a handful of hits (and misses) including "Born on the Fourth of July", "Wall Street", "The Door", "JFK", "Natural Born Killers" and "Any Given Sunday". Today, for the initial post of "Stone Week", I take a look at "Platoon" - a film based on Stone's own Vietnam War experience. 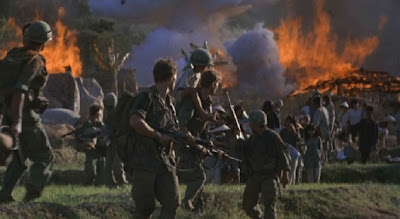 I'll barely be able to fill a full paragraph with a plot synopsis for "Platoon", because really the film is just about a platoon of men in the Vietnam War. A lot of the film is actually plot-less as we simply observe the men and watch what they experienced on a day to day basis, during the war. The main character is Chris Taylor (Sheen), a boy who left his rich upbringing and college life to take part in Vietnam, because he felt like he needed to make a difference. The film is also narrated by Chris, as we overhear letters that he's writing back home to his grandma. He admits that he doesn't know what he's doing out there and that no one has the time to show him how to be a soldier, something he ultimately has to figure out for himself. After an incident at a Vietnamese village, where Sgt. Barnes (Berenger) murders an elderly Vietnamese woman, the platoon is split in two, with half of the soldiers siding with Barnes, while the other half take the side of Sgt. Elias (Dafoe), a hippie soldier who plans to bring charges against Barnes. 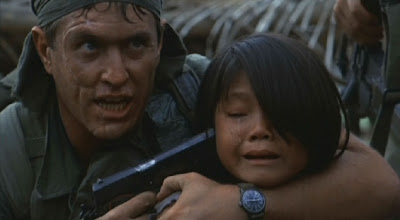 The reason I can't stretch the plot summary of "Platoon" into a full paragraph, is the same reason why I don't like it. Listen, war movies aren't for me, end of story. I've said that from day one on this blog and that's USUALLY the truth. Every once in a while, however, there is an exception to every rule and when I see movies like "All Quiet on the Western Front" or "Saving Private Ryan", I start to question my own disdain for war films. However, "Platoon" is a text book example of what I don't like about war films and that's when all we get is war. There's no subplot, there's no nothing and all we end up getting is scenes that depict life in war. I have a feeling that Stone's movie is, perhaps so personal that you had to have experienced war to really get the full effects of it. It's one that I just don't like because of it's genre and because it doesn't work for me and there's no further dissection required.


I will say, however, that some of Sheen's narration is pretty effective. At times, it works to enlighten a viewer who may be completely unfamiliar with military life and let them in on some of what it would be like to be out on the field of battle. And what about that cast, huh? Actually, I find it kind of funny that the supporting cast is far more talented (or would go on to be far more talented) than the three lead actors (with the exception being Willem Dafoe). What was Stone smoking when he decided that it would be a good idea to let Charlie Sheen and Tom Berenger star in his movie? God, I can't stand either of them. Now then, if you take a look at the supporting cast, you've got some major talent in there: Forest Whitaker, John C. McGinley, Johnny Depp, Tony Todd, Richard Edson and Keith David - all fine actors or guys who would develop into fine actors. 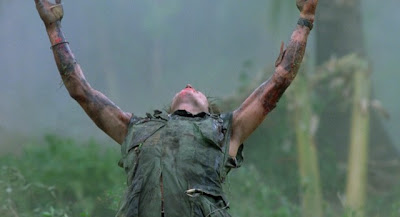 Of course, the famous scene in "Platoon" is the overly long death of Sgt. Elias, but it's a goose bump inducing moment, so be on the lookout for that.