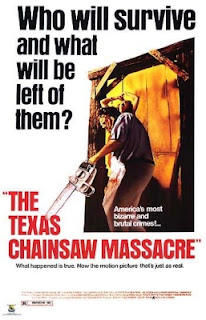 Wow, I am just all over the map here with my recent selection of movie choices. Yesterday I reviewed "The Umbrellas of Cherbourg" and we go from that to "The Texas Chain Saw Massacre", perhaps the two most polar opposite films in THE BOOK.

The film begins with a narration from a young (and then unknown) John Larroquette, telling us that the story we're about to see is true and warns us that it won't be pretty. Of course, the story isn't completely true, just loosely based on the Ed Gein murders of the 1950s. The main characters are a group of twenty-somethings, two of which are brother and sister: Sally Hardesty (Burns) and her paraplegic brother Franklin (Partain). They are joined by Jerry (Danziger), Kirk and Pam and are on their way to check on their grandfather's grave following reports of vandalism in the cemetery where he's buried. After they discover that the Hardesty grave is safe and sound, the group head back out on the road, toward an old house that Sally and Franklin's father owns. Along the way they pick up a hitchhiker; a real nutcase who ends up cutting Franklin's arm open with a razor. Eventually the group make it to the old house and when Kirk and Pam decide to find the old watering hole and go for a swim, they wander into some serious trouble. Lost and knowing that the van needs gasoline, Kirk makes his way toward a seemingly occupied farmhouse, in hopes that the residents can help him and the gang out. What he finds is Leatherface (Hansen), a maniacal, brain dead serial killer who wields a chainsaw and has a penchant for collecting body parts. It's obvious that Pam, dressed in slutty short shorts and an obvious piece of sacrificial eye candy, won't last long and that is confirmed when she's hung on a meat hook, while she's still alive. Kirk follows, being dealt with in an even more brutal fashion - carved up with the chainsaw! Now there are only three members of the group left and Leatherface is just warming up. 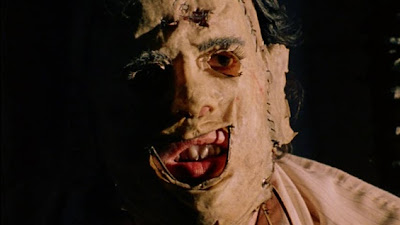 I have a fairly equal list of pros and cons, so we'll start with the pros and ease into the cons. The film is gritty, low budget and obviously was a pet project for Tobe Hooper, the director and co-writer and that's one of the reasons why I do like it. It's obvious that Hooper cared for this film and took the time to see his vision through to the screen. Looking at his filmography, Hooper peaked early (this was only his second film and with the exception of "Poltergeist", didn't do any other notable films), which makes you wonder if he just never found a project that motivated him as much as "TCSM" did. It's a freaky movie, I'll give it that. I think, at twenty eight years old, I've finally grown out of the period where I get scared by movies. I can remember being a boy and wondering if that day would ever come, the day when I could watch a movie and then make it through a night's sleep without knocking on my mother's bedroom door. Thankfully, my brother didn't show me this until I was a teenager and thankfully we shared a room. The damn thing is just so gritty and low budget that you can't help but be scared by it. I've always said that the scariest films are the ones with no name actors, because if you can identify or place someone in a horror film, then the entire cover is blown. If you dress George Clooney up like a vicious, vampire, serial killing, nutso freak, it isn't going to go over too well because the whole time the audience will be saying, "Oh it's just that nice doctor from E.R.". When you can't identify the principles, then you have no frame of reference and they're just regular people to you, putting on a hell of a show. The make-up here is awesome and Hooper's location choice, an abandoned, decrepit old house is perfect for stirring up some unsettling feelings in the audience. 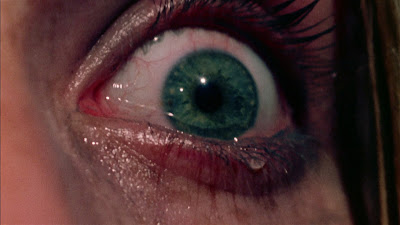 But is it a "must see"? Sure, it was innovative, had a whirlwind of controversy at the theaters and was a trend setter for horror movies that followed, but at what point do we forget all the accolades and innovation and realize that it's not new anymore, it's not original anymore and now, it's lost some of it's luster? The low budget thing kind of works both ways here, because in a way it's admirable that Hooper was able to make this independent film for less than $300 grand, but the damn thing looks so cheap and amateur that it looks really silly sitting in a book, next to the likes of "Taxi Driver" and "Modern Times". It'd be like sitting Derek Jeter down next to a some little leaguer and saying, "Well yeah this kids only in little league, but he's fast and he can really hit that ball far!" No one would care because he's sitting next to Derek Jeter! Okay, maybe that's a bad analogy, but I don't care and I'm not erasing it!! Anyway, as far as slasher films go, this is the be all, end all and if that's your bag, you can skip all the others because this is the ultimate slasher flick. It's grittier and scarier than any horror film that's been released for the past twenty years (maybe more). However, it is very amateur, so beware. It isn't crisp, clean, well shot, well acted and with a great score. It's balls to the wall gore, horror and gruesome, so if that's your thing, then this is YOUR "Taxi Driver".

RATING: 6/10  It just doesn't happen to be my thing. Fun as hell, but as far as quality goes, it's definitely lacking. Now I'm heading outside to smoke a cigarette...anyone wanna' come with me?