A Word (or Two) About Hitchcock 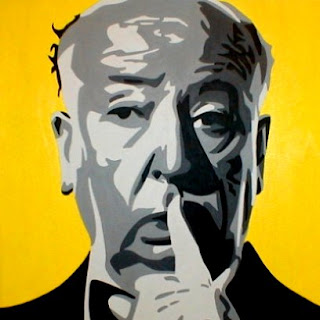 Well, on November 11, 2010, "Hitchcocktober Fest" has come to an end...finally. I say "finally" because it was supposed to come to an end in October and not because I'm glad that it's over. I had a really good time experiencing and re-experiencing Hitch's work.

They way I see it, Hitchcock's films were unique in the fact that he knew what viewers wanted to see, while at the same time he was making movies that he would want to see. Hitchcock seemed to have his fingers on the pulse of his viewers and each and every time he made a film, he appealed to wider fan base, until he became, probably, the greatest known film director to ever live. His films were so much fun to watch and each time I popped a Hitch' DVD into my DVD player, I knew I was in for another wild ride. Whether I was following the exploits of the Necktie Murderer, staring out the window with L.B. Jeffries or watching innocent Manny Balestrero be jailed for a crime he didn't commit, I was having a good time. Hitchcock's films seem to produce an air of self indulgence, in the fact that you can almost tell just by watching them that he put everything he had into these pictures and he loved them just as much as us. At the same time, they weren't self indulgent at all, because we, the viewer, loved every minute as well.
Not only did Hitchcock appeal to millions of his fans/viewers, but he also left a mark on future filmmakers and to an experienced eye, we will continue to see traces of Hitchcock films live on forever in the work of the directors who Hitchcock rubbed off on. In fact, according to his IMDB page, the following filmmakers cite him as an influence: Steven Spielberg, Brian De Palma, John Carpenter, Sam Raimi, M. Night Shyamalan, Martin Scorsese, Geroge A. Romero, Peter Bogdanovich, Dario Argento, William Friedkin, David Cronenberg and Quentin Tarantino, all director's who appear in the "1001 Movies..." book.
I'll stop talking now and leave you with a ranked list of the eighteen Hitchcock movies from the "1001 Movies You Must See Before You Die" book.
18. Sabotage
17. Notorious
16. Spellbound
15. North by Northwest
14. Rebecca
13. The 39 Steps
12. Rope
11. Vertigo
10. Marnie
09. Psycho
08. Frenzy
07. Blackmail
06. Strangers on a Train
05. The Birds
04. The Man Who Knew Too Much
03. The Wrong Man
02. Rear Window
01. Shadow of a Doubt
NOTE: Of course, the key to that list is #18 being the worst and #1 being the best, in my opinion. It should also be noted that I really liked 12 - 1, reiterating the fact that Hitchcock was a fabulous director and shooting him straight into my Top 10 Directors. Also, that list is a bit rough and some of those rankings are quite possibly interchangeable.
November 11, 2010 8:23pm