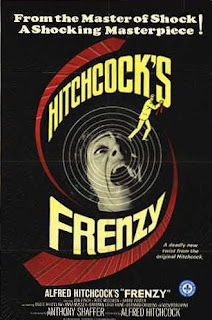 Well we've finally made it to the end of our journey with Alfred Hitchcock. Last night I was finally able to watch my last "1001" Hitchcock movie, "Frenzy" and I must say, that while it didn't altogether feel like a Hitch film, I enjoyed it very much.

The film takes place in London and this time around we're focused in on Dick Blaney (Finch), who's just been fired from his bartender job for being suspected of stealing booze. We follow Blaney around London as he counts his losses and bumps into some acquaintances, including Bob Rusk (Foster), a very nice fellow who runs a fruit and flower market and who offers to help Blaney in any possible way that he can. Following his encounter with Rusk, Blaney calls upon his ex-wife, who runs a matchmaking service. She's pleased to see him, even after he gets abusive with his language, and they have dinner together that night, where she slyly slips fifty pounds into his coat pocket. Not knowing about the fifty pounds, Blaney takes refuge in a Salvation Army center. Meanwhile, much more important things are going on in London, as the Necktie Murderer is on the loose, as the police search frantically, before more victims turn up with necktie's wrapped around their throats. All signs point to Blaney as being the vicious Necktie Murderer, especially when Blaney's ex-wife turns up as the latest victim of the killer. What the police don't know and what we, the viewer, do know is that the murderer is not Dick Blaney, but rather the "nice on the outside, vicious on the inside" Bob Rusk.

I must say I was a bit taken aback when I started to hear cursing and see nudity in an Alfred Hitchcock film. Not that I'm a 'G' rated movie watcher, I just didn't expect that kind of thing from jolly old Alfred. I eased into it fairly quickly though and was able to really enjoy myself and go out on a high note with Alfred.

I thought that the three male leads were all excellent, with Jon Finch being the lesser of the three. I quite enjoyed Barry Foster and what a creep he was, huh? The character of Bob Rusk immediately receives a pass into the creepiest and cruelest of all Hitchcock villains. I loved the mixture of humor and suspense Hitch' was able to create, when he throws our villain into the back of a potato truck, with the corpse of his latest victim and has him fishing about her body, looking for his "R" pin. I also really enjoyed Alec McCowan as Inspector Oxford, and actually would probably peg him as my favorite character in the film. I thought he was a brilliant actor and I loved the running gag of his wife being completely incapable of cooking gourmet meals, which leaving him to scarf down breakfast at the office and sneak hideous looking soup back into the bowl when she's not looking. Also, as it pertains to Rusk, I love how Hitchcock made you really like the guy at first (before we found out he was the killer) and then totally turns the tables on us and makes us despise him.

The ending was hit and miss with me, as I could've seen it going a few different ways, but ultimately I wasn't totally displeased with it and it worked. Blaney ends up going to prison for the Necktie murders, but later, Oxford realizes that Blaney is innocent and that Rusk is the guilty one. Before Oxford can get him pardoned, Blaney escapes and makes his way back to Rusk's place, where all three of the main male leads have a final encounter. Oxford mentions something at one point about Blaney possible getting monetary compensation for the time he had to spend in prison. They never touch upon it, but they could've done a "blessing in disguise" kind of ending, where Blaney does have to spend a few days in prison, but gets a handsome reward, thus getting him out of the poor house. I also wouldn't have minded it too much, if Blaney ended up getting re-caught at the end and thrown back in prison, as kind of an "anti-revenge" theme.

All in all though, the film was highly enjoyable, with great acting coming from several different sources and a very engaging plot. Hitch captures London very nicely too and we can feel the city looming over us throughout the movie.

RATING: 8/10 Well Alfred, I had a lot of fun revisiting your pictures, old boy. I may be back with a little Alfred Hitchcock retrospective later on tonight. Stay tuned.