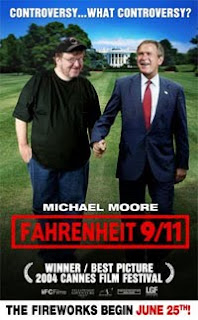 NOTE: For those of you who missed the "Coming Soon" post this past Sunday, I apologize. I had Sunday off and planned to squeeze in more than one movie, but that afternoon I came down with a pretty wicked little bug, resembling the flu, and couldn't muster the strength to even get to the computer to put the "Coming Soon" post up. I'm feeling better now though and prepare for some Ang Lee films in the days to come.

I'm going to try to keep my personal opinions on this one to a minimum, because while I do realize that there isn't a mass of people reading this blog, I'd still like to avoid angering anyone who does read it. "Fahreneheit 9/11" was the 2004 film from the controversial filmmaker Michael Moore, where he had some very unkind things to say about the Bush administration.

The film starts out by giving some short detail on the 2000 election and the circus that erupted in Florida following that controversial election. George Walker Bush is eventually deemed the winner of the election and named the 43rd President of the United States. Moore suggests that the voting controversy in Florida was basically fraud and uses sarcasm to tear apart President Bush for the many months of vacation he took following his inauguration. We then get to September 11, 2001 and we all know what happened on that day, so don't allow me to remind you of the gory details. Moore focuses mainly on the aftermath of the attacks and examines the relationship between the Bush family and the bin Laden family. Moore alleges that 24 members of the bin Laden family were evacuated out of the United States just days following the attacks, when all other air traffic was stopped. Moore then discusses the Patriot Act and finds out that most members of Congress don't actually read the bills that they vote on, prompting Moore to rent an Ice Cream truck, drive through Washington D.C. and read it to them. Moore also talks with alleged victims of the Patriot Act. We then delve into the Iraq War as the film closes out and examine the life of the Iraqi people before and after the war. Moore suggests that because the war was based on a lie, atrocities will occur, prompting him to discuss possible abuse to Iraqi prisoners via U.S. soldiers. Moore also follows two Marine recruiters and talks with a fellow Flint, Michigan native, Lila Lipscomb, about her feelings on the war before and after the loss of her U.S. soldier son. The film concludes with George W. Bush stumbling to get a grip on the "Fool me once..." quote.

My political views are basically nonexistent, as I am not a registered voter, rarely watch the news and do not do any following of any politics. Do I agree with Michael Moore and his documentary? Well, I kind of hesitate to say whether I agree or disagree with him, but I will admit that he made a powerful documentary in "Fahrenheit 9/11". He proposes some interesting opinions and facts and you almost hope they're not true, because if they are, it's a scary thought. I don't think Michael Moore seems like the type of guy to make a documentary based on false facts and totally slander the Bush administration. Moore SEEMS like a guy who loves his country and wants the best for it and becomes angry when someone swerves it off the path of being as great as it can be. This is just the way things SEEM to me and assuming those thoughts are correct, then I guess I tend to agree with Moore...call me an un-patriotic S.O.B., if you will, these are simply my opinions. Going back to the film itself, I think it's a well made documentary, that has a powerful message and I think EVERYONE, even the most conservative of Republican, will want to see this movie, either to hail it or point out its inaccuracies. Let's just leave it at that, shall we?