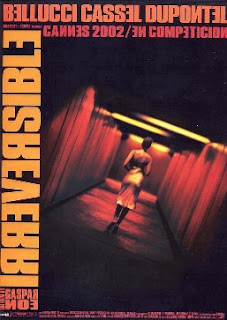 "Irreversible" debuted on Netflix streaming a week or two ago and I was excited to see it pop up, as I've had my eye on this one for a very long time and finally I got to check it out last night. Unfortunately I was very disappointed.

The film really only has three characters, Alex (Bellucci), her boyfriend Marcus (Cassel) and her ex-boyfriend Pierre (Dupontel). The story is told in reverse chronological order (ie. "Memento") and uses very erratic camera movements, especially in the beginning (or technically the end). The plot is pretty simple, so we'll keep it as simple as we can. Alex, Marcus and Pierre are going to a party together. They arrive at the party and while they're having a good time, Alex is displeased with the seemingly drunken behavior of Marcus. Alex gets angry with Marcus and leaves the party. On her way home, she is instructed by a stranger to take the underpass and while walking in the underpass she encounters La Tenia (Prestia) who proceeds to brutally rape and beat her. When Marcus and Pierre arrive home they notice a ruckus and quickly learn of Alex's state, as she is being wheeled into an ambulance, unconscious. Marcus, set on revenge, takes Pierre with him and with the help of a stranger, finds out the name of the man who perpetrated the acts against Alex. He tracks La Tenia to a club called "Club Rectum", a homosexual S&M club.

I had a lot of problems with this film, so we'll go ahead and start with the bad. For starters, I did NOT like the way the story was told - in reverse chronology. In my view, that method of storytelling really only works one time and for me that "one time" was "Memento". Beyond that it becomes an obvious attempt to try and recreate another film makers method and just seems really cheap. Also, the reverse chronology just didn't work for me here. The other element of the film that really stopped me from enjoying it more was the erratic, handheld camera. To me both of these elements of telling the story were unjustified and there was no gain in telling the story in this fashion. I could see if there was some justification for telling the story that way, then fine go ahead and do it, but from my perspective, there was nothing to gain from going that route.

Let me interrupt myself and shine a little praise toward "Irreversible" and it may sound strange, but I actually applaud Noe for going all the way with the rape scene. MANY film makers would back off when it came time to incorporate the rape scene, showing it from far away or allowing us to hear the screams of the victim, but never see the act itself. This was one of the most painful and disturbing scenes I have EVER seen in any film and it was really hard to watch. Noe wanted us to feel closer to his characters and forced us to watch as Alex was raped and then beaten by her attacker. Rape is not a pretty or pleasureful thing, and it shouldn't be portrayed as such, therefore we SHOULD be forced to feel as uncomfortable as possible when watching it being played out. So...while it was hard to watch, I'd have to say the rape scene was the high point of the film and thank God Noe had the balls to show it.

One thing we as a viewer realize when watching the rape scene is that Pierre killed the wrong man at "Club Rectum". What was the point of that? What is Noe trying to tell us? To me, there has to be some kind of hidden message in the fact that Pierre killed the wrong man. IS he trying to tell us that violence is NEVER the answer and often times its the innocent who suffer the greatest consequences? Maybe. Is he trying to tell us that vengeance isn't the answer and that those who seek revenge will later regret it? Maybe. Or maybe Noe wanted us to see violence in it's most senseless forms. A senseless rape, followed (or preceded in this movie's case) by a senseless killing (In the film Pierre smashes the face of an innocent man, whom he believes to be Alex's attacker, with a fire extinguisher). But isn't all violence senseless? I believe that it is, which would put my previous theory to rest right there. I don't know, I guess there are a bunch of interpretations and a bunch of explanations for different parts of the film, but one thing is for certain: Nothing is laid out for us in a nice neat pile and obviously this is a movie that is meant to be pondered over. This point could be made blatantly obvious by a "2001: A Space Odyssey" poster hanging on Alex and Marcus' wall, a film that is often pondered over.

In fact, one theory (one that I could wrap my head around) says that the majority of the film (including the rape) is a dream (or nightmare maybe). Alex wakes up toward the end of the film and says that she had a dream. She mentions something about a red tunnel and Marcus comforts her. From that point on, the film is seemingly in normal chronology.

I don't know guys. Many interpretations. My first instinct was to rate this film low and I probably will. But, honestly, this is a very high candidate for a rewatch and I will rewatch it eventually. But for now, it only gets one opportunity to impress me, just like the other one thousand films in the book.

RATING: 4.5/10 Remember the old "knee jerk" comment. Honestly guys, outside of the rape and fire extinguisher scenes, the film is fairly slow, with really not much at all happening, so in my opinion, that's a just rating.