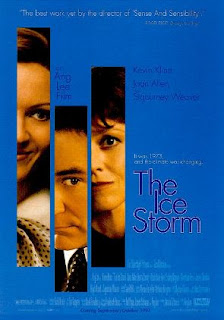 Ang Lee Week continues on with "The Ice Storm", a film that I saw once, several years ago and totally forgot that a portion of it was set during Thanksgiving, which is less than a week away. I didn't remember the film as being anything particularly special and once again my memory did me a great disservice.

The film is set in New Canaan, Connecticut, in the 1970s and follows two families throughout, primarily the Hood Family. The Hood Family is headed up by the father, Benjamin (Kline), a very dissatisfied father, both with his marriage and his career, who turns to suburban seductress Janey (Weaver) to have an affair with. Ben and his wife Elena (Allen) have given up on couples therapy, despite the fact that the roses have not returned to their relationship. While Elena suspects Ben of infidelity, she can never coax a confession out of him, despite her bad moods and short temper with him. The Hood's have two children, 14-year old Wendy and 16-year old Paul. Wendy is a curious young teenager who is interested in sex and Watergate, possibly trying to act more adult and Paul is the most level-headed character of the film, lusting after schoolmate Libbets Casey (Katie Holmes) and reading Fantastic Four comics. The other central family in "The Ice Storm" is the Carver Family, headed up by father Jim (Jamey Sheridan), his wife Janey Carver (Weaver) and their two sons, Mikey (Elijah Wood) and Sandy (Adam Hann-Byrd). As the two families tail-spin out of control and deeper and deeper into loneliness and infidelity, it all comes to a head on the night of the big ice storm.

The film is a depressing one, unlike my previous "1001" Lee experience, "The Wedding Banquet", which ended with the theme of happiness. This film goes for the depressing effect and the pale color of the film, with the backdrop of a winter ice storm, hammers home that mood. An amazing cast was assembled to bring author Rick Moody's tale to life, with great performances from Kevin Kline, Joan Allen and Christina Ricci. No one on the cast does a bad job and all the actors play a vital, yet sometimes small, role in the story. The music is phenomenal too and I am realizing the greatness that is Mychael Danna, the film's composer.

While the entire mood of the movie is dark and dreary, it's still a mood that appeals to me, as I'm always interested in the downfall of humans. This film is about that downfall and while I haven't yet figured out the relevance of the actual ice storm, I'm sure it somehow correlates to the behavior of the characters. There are some key scenes here that I feel compelled to mention, which include a scene where Ben catches Wendy experimenting sexually with Mikey Carver. When they walk home, he tells her that he's really not that mad and that he just wants her to make the right choices. He asks her if her toes are cold and when she nods in agreement to his question, he offers to carry her the rest of the way home. A very sweet scene, that felt a bit rushed and had me really feeling for these poor, pitiful characters. The ending is, of course, a great scene and I'll hesitate from ruining it for people who have yet to see it, but it is a very powerful ending. I don't know what else to say about "The Ice Storm". It's a really good film, that uses mood, atmosphere and interesting, yet sometimes unlikable characters, to give it that greatness and make it a definite for the "1001" book.