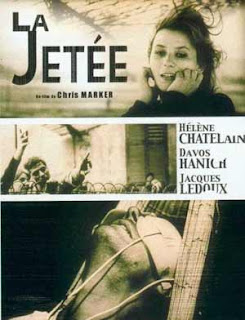 This movie has been floundering on my Netflix streaming queue for a good while now, so I figured I'd go ahead and give twenty-eight minutes and get it watched. It wasn't really that bad, but then again, it was a short film and there really wasn't a lot of time for error.

If you've ever seen the film "12 Monkeys" then you already know the premise of "La jetee". "La jetee" is told entirely by using still photographs and is about a post-apocalyptic world, following World War III. In the future, some scientists want to gather some human guinea pigs together to send into the future, citing that they need to "call past and future to the rescue the present". After some trouble finding humans who can withstand the shock of time travel they call forth a prisoner, based on the fact that he is obsessed with a childhood memory about a woman he saw and a murder he saw. He goes into the past and finds the woman, spending some time with her and forming a relationship with her. After being sent to the past, he is then sent to the future, where he encounters a group of people, who provide him with the power to regenerate his own, present society. After returning to present day, he learns that he is to be executed, but is then contacted by the future people, who offer to help him. He requests to be transfered to the past permanently, so that he can live with the girl in pre-war times. They oblige him and he is sent to the past where he plans to meet the girl on the same pier where he witnessed a murder as a small boy. When running to meet the girl on the pier, he is shot and realizes that the murder he witnessed as a child was his own.

I guess I just have a problem regarding short films as anything other than "good" or "not good". I have a harder time handing them the status of masterpiece. It just seems so ridiculous to me to deem a movie that is less than half an hour a masterpiece. Sure, "La jetee" is a good little movie and the photography is very nice. The ending is probably the most harrowing part of the film and the narrator's voice (dubbed in English in my version) was a powerful, good storytelling voice. Actually I've always been a big fan of "12 Monkeys" and seeing it first, I'd have to say I prefer it much more than this one. I'll have to say that Terry Gilliam did a pretty good job stretching twenty-eight minutes of story into two hours and the final product was really good, though much more complex than this. This was a simple, little sci-fi tale that served its purpose and got it's story across, so I'd say it's a success, but still...it's simply too short to really amount to anything more than a mild recommendation.

RATING: 5.5/10 That's a rating that rates "La jetee" on a short film scale and the "1001" scale. Good for a short film, but not significant enough to make it into this book.