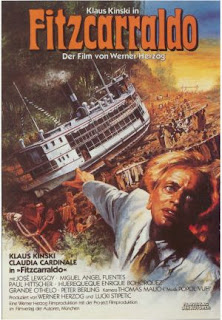 Thank you to the few people who took the time to comment on the FINAL 50 post. Glad to see there's some interest in my finishing this project. There's definitely some interesting stuff still left to get through and I actually have high hopes for a lot of them. Let's start ticking them off, shall we? 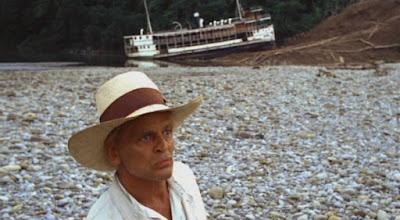 This would be the big finale in Herzog Week - a week that started out rough for me with Aguirre: The Wrath of God and ended up being not bad with the fantastic Stroszek and the pretty good Nosferatu. In Fitzcarraldo, Klaus Kinski returns to work for Werner Herzog as Brian Sweeney Fitzgerald a.k.a. Fitzcarraldo. Fitz' lives in a small Peruvian town called Iquitos and has big dreams of building an opera house there and inviting famous opera singer Enrico Caruso to sing on opening night. However, this dream requires money and lots of it. Fitz' tries his hand at the railroad industry but fails. His second attempt is in the ice industry, which also fails. Finally, Fitzcarraldo becomes interested in the rubber business and has a conversation with local rubber baron, Don Aquilino (Lewgoy) he discovers that there is an unclaimed piece of land along the Ucayali River that is home to thousands of rubber trees. The only problem is that Fitz' lives on the Amazon river and to navigate down the Ucayali from the Amazon is impossible, due to raging rapids. However, Fitzcarraldo notices a third river, which also pours out of the Amazon, called the Pachitea River and that, at one point, the Pachitea and the Ucayali almost touch. Therefore, Fitz' gets an idea (which we don't entirely find out right away), buys a boat, with help from his prostitute girlfriend, Molly (Cardinale) and sets sail down the Pachitea. However, he is warned beforehand that Indians live along the Pachitea and are quite hostile to outsiders. 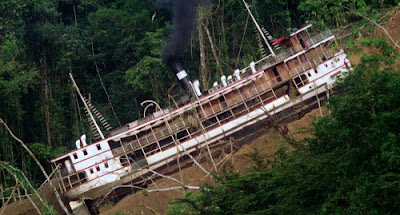 Man, Werner Herzog must have LOVED watching Klaus Kinski perform to hire him back after all the trouble he had with him. I won't go into retelling all the stories, but do a search on Aguirre: The Wrath of God or even Fitzcarraldo, and you're sure to see highlights of the knock down, drag outs the two had on set. Not only did he hire Kinski for the three collaborations that I've reviewed, but also two more movies, which I feel compelled to watch now, just so I can see how they turned out. I'd be hard pressed not to call Kinski one of my favorite actors throughout THE BOOK. I mean, he was really outstanding here, completely transformed himself in Nosferatu and was good enough, I guess, as Aguirre. Perhaps the reason he got into so many fights is because he clearly took his work seriously and was a passionate man, on and off screen. Again, the fact that Herzog hired him five times, after all the trouble they had on the set of Aguirre shows how great he really was (Herzog actually had to pull a gun on Kinski on the Aguirre set!).

What a movie! This is one of those films that brings to mind the word grandeur and when I watched it, I couldn't help but think, "this is what movies are supposed to be" - adventurous, exciting, heartbreaking, inspiring, beautiful and creative. The phrase "epitome of a great movie" kept flashing in my head, as I sat awe struck, watching character Fitzcarraldo pull that boat over a mountain. But it was more than just the whole boat scene. It was the big dreams of a small man, the dangerous trek down the Pachitea, the wild Indians, the raging river rapids - it was really the quintessential adventure picture and I was surprised at how much I liked it, since I'm usually a more minimalist sort of film lover. In fact, this week I was forced to change my whole taste profile, as I watched My Dinner with Andre and didn't like it and then the next day watched something that I'd normally dislike (Fitzcarraldo) and loved it. It just goes to show that no film lover should confine themselves to one genre - be a versatile viewer, watch everything you can get your hands on and be open minded when it comes to movies from genres you wouldn't normally go for, as well as time periods and countries you wouldn't normally go for. If there's one thing I can thank the 1001 Movies You Must See Before You Die book for, it's for keeping me open when it comes to what I love and what I detest. I think by now I can consider myself a world traveled film watcher - having watched movies from 1902 - 2015, from all around the world, from all sorts of different directors and from all sorts of different genres. I've liked a little bit of everything and I'm proud of that fact. 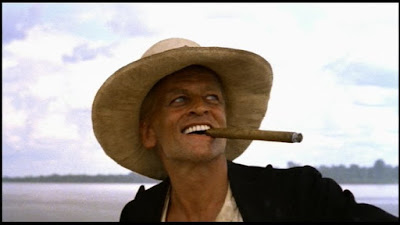 I don't really know what else to say about Fitzcarraldo. The phrase "what's not to like" comes to mind. It was an epic that I was able to tolerate for every last second and actually could have even taken another hour, had Herzog had the material. Normally, I'm against long movies, I've noticed. But this was an exception to the rule and one that I could've watched for hours and hours. How heartbreaking was that ending though? I mean, after all that struggle to get the boat over the mountain and then BY GOD, he actually does it!! - only to have the Indians untie the boat in the middle of the night, sending it drifting into the rapids. Hell, I was still sad even at the very end, when Fitzcarraldo hires an orchestra and opera troupe to come onto his steam ship and play a mini concert, while the boat sails down the river. Despite Kinski's big cheese eating grin (priceless), I still felt sorry for the character. He here is having to force a smile onto his face, even though you know deep down he's got to be gut wrenched at the thought of having to give up his dream. Not only will he lose the steam ship and the millions he thought he'd earn as a rubber baron, but more importantly, the dream of building an opera house is gone. However, maybe we can interpret that grin a different way? Perhaps that grin is so big, because as he's rolling down the river, aboard his steam ship, listening to his music, he's also scheming up his next, big, money making venture? Perhaps this time he's surely got it - a can't miss opportunity. I just can't see this character giving up. Despite his foolhardy ideas, you can't doubt the character's determination and passion. Yeah, I'm sure that's why he's smiling.

RATING: 8.5/10  I feel like my mind is telling me not to give out another '10' or even a '9' since I just went big on Scarface. With time and repeated viewings, Fitzcarraldo is favorite material.