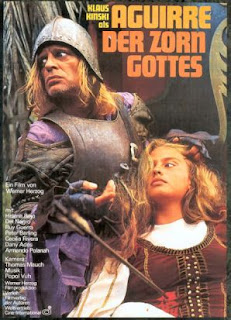 So this will actually be the breaking of my cherry, as it pertains to Werner Herzog movies, as I've literally never seen one of his movies, not even a bit or a piece of one, as far as I remember. I have to say my initial impression is pretty sour. Read on... 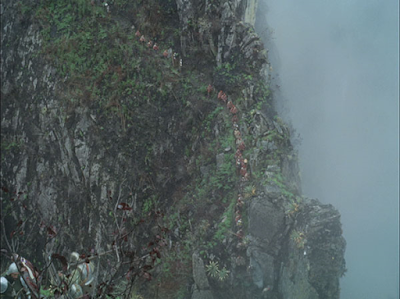 Aguirre, The Wrath of God, is a film that I've heard a lot about and of course, I've seen the stills of Klaus Kinski dressed in conquistador armor for as long as I've been interested in film. It's one of those films that always comes up when you talk about "the greatest" or "the best" and one I almost knew nothing about going in. The film is fairly short and tells of a group of Spanish conquistadors, fresh from conquering the Inca Empire, in search of the city of El Dorado, which is where they believe they'll find riches & gold. However, when the group (which numbers in the hundreds) reaches the end of their supplies and a rough terrain, their leader, a man named Pizarro, orders a group of forty men to go down river via man made rafts, in search of further information and/or supplies. If they do not return in one week's time, they will be considered dead and the group will try to go on without them. The group of forty will be lead by Ursua (Guerra) and second in command will be Aguirre (Kinski). After traveling for a while, one of the rafts gets caught in an eddy (a patch of rough waters that it's unable to navigate out of) and the others can only watch on as their cohorts face certain doom. Meanwhile, Aguirre manages to lead an uprising against Ursua, the latter of which wants to return to the group when the rafts are swept away and the former, Aguirre, wanting to continue searching for El Dorado and certain fortune. 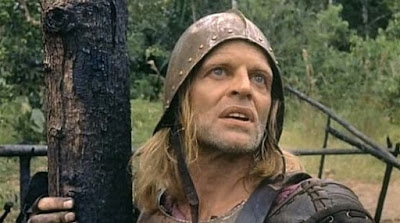 Here we go again with a movie that I simply do not get the appeal of and one that I'm "supposed" to like. This is one of those movies that most film snoots usually go for, but I'm sorry, I just don't get the appeal here. Apparently, the film lent a lot of ideas to Coppola's Apocalypse Now and while I didn't love that movie, at least there we see a group of men sailing upstream (or downstream, whatever) and ultimately, we get a payoff from all that. Here, we don't even really get a payoff, as the group never reaches the city of El Dorado and the whole thing ends with a seemingly mad Aguirre, chasing monkey's around a raft that's bound to sink. He's all but dead by film's end and since the character development kinda stunk, I couldn't have possibly cared less about the fate's of the character's in the first place. Not only that, but the film is set in the 1500s and with a few exceptions, I tend to dislike period pieces set that far back. It's another example of me just being very disinterested in ancient history and unless the director takes careful consideration to make it interesting to all comers, I can't be bothered. This was an example of Herzog appealing to a certain audience who would go for this sort of thing and not necessarily a widespread audience. There are certain pieces of history that I can go for (most Holocaust stuff and more recently, the Prohibition era in The Untouchables), but for the most part unless I know a little bit about it going in, I tend not to like and that's what I think happened with Aguirre. 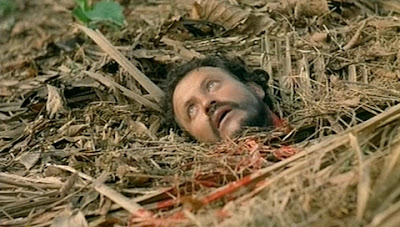 RATING: 3/10  No use drawing it out, right? I didn't like it and that's that. I'll give it a few points for keeping me mildly interested, but by film's end I was only half paying attention and half playing on my phone, so there ya go.