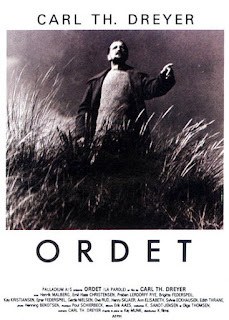 WELL YOU GOTTA' HAVE FAITH

I promise I'll eventually get to Man of Iron and finish of the little Wajda tribute, but for now I'm just fitting in what I can so that I can hit my August goal while I still have time. I still need to squeeze in three more movies between tonight, tomorrow & Monday and we'll be good to go. 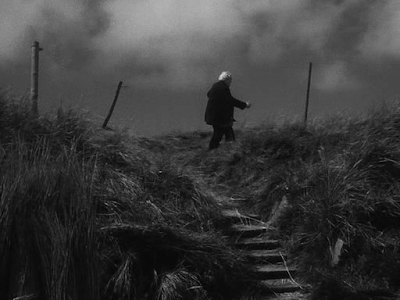 Ordet (meaning "The Word") was originally a play, penned by Kay Munk. It begins by introducing us to a family: The Borgen's, who happen to reside on and own Borgen Farm. The patriarch is Morten Borgen (Malberg) and he has three sons, all of whom still live on Borgen Farm. There's the eldest, Mikkel (Christensen), the youngest, Anders (Kristiansen) and the middle child, Johannes (Rye). Johannes also happens to be insane, something that happened to him while studying theology. Now Johannes thinks that he is Jesus Christ and often wanders off. Meanwhile, there is also Inger Borgen (Federspiel), Mikkel's wife - together the two have two little girls and are expecting a third baby. The family is close knit and the family believes in God, although the film brings their brand of faith into question. A subplot revolves around Anders' interest in a neighbor girl, Anne Petersen, to which Anne's parents swiftly object to her involvement with the boy. The Petersen's believe that their faith is superior to the faith of the Borgen's and thus, don't want Anne fraternizing with Anders. On the night that Morten goes to talk to Mr. Petersen about the possibility of becoming in-laws, Inger goes into labor and there are dreaded complications. 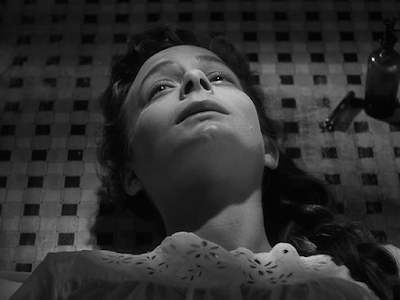 Let me start by saying that I actually really liked this, despite not usually liking to mix religion and film. Let me follow by saying that I don't know how to go about writing this review, as I just don't usually like to get too into discussing religion, for fear of alienating or offending people. I believe in God, it's well documented on this blog, but my belief system, I think, is a little different. I don't go to church, I cuss like a sailor and I'm not above telling a fib or two. I don't really consider myself a Christian, per se. Whenever anyone asks me, I just say "I'm a believer" and leave it at that. For me, that's enough. So pardon me while I try to skirt around this subject with kid gloves.

So what is faith? I've always been partial to that passage in the Bible that says "Faith can move mountains. You can say to a mountain to crumble into the river and if you truly believe it will happen, it will". I'm paraphrasing, but I've thought a lot about that particular passage over the years. Is anyone really capable of doing this? I can go outside right now and tell a nearby mountain to crumble, but in the back of my mind (and probably the front too) I'd have serious doubts of it actually happening. If my wife is running three hours late for dinner and she's never late and when she is, she texts to say she's going to be late - well, I can start praying, but I'm still going to worry myself sick until she walks in the front door. A man with strong faith, would say his prayer and then forget about his wife being in danger, because he'd then KNOW that she was fine, that his faith in God would bring his wife home that night. Very few, if any, people in the world have that sort of faith. This is why Jesus Christ was such a marvel - he wasn't a magician. He turned water into wine and walked on water because he truly believed he could and had no doubts about God's power to assist him in doing these things.

Ordet brings the so called faith of the Borgen clan into question. Those in life who claim to have faith in God rarely do. I could travel into the bible belt of the U.S. and find the most devout, church going Christian there is and I bet they too wouldn't have the type of faith that would raise the dead. That's what Ordet is about. Morten Borgen claims to be a man of higher faith, as does Peter Petersen - who actually thinks he's even more superior to Borgen - yet, when Inger dies, they never give raising her from the dead a thought, it would be preposterous to them to even propose this. It's quite a fascinating little film, that makes you think, perhaps, about your own faith, your own beliefs. The film is not anti-Christian, it simply brings the beliefs and holier than thou attitudes of Christians into question and puts it under a microscope.

RATING: 7.5/10  I could probably write a book about my thoughts on Ordet, it's characters, it's themes, it's messages, etc. but I already feel like I'm mumbling and I think I've hit my key points.