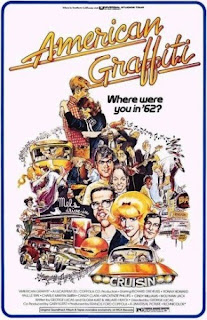 I've gotten off track a little bit, as it pertains to finishing this whole thing up by Halloween. I'm not saying it won't be done, but the short term goal was to only have forty movies left at the end of August and I'd have to watch eight more in ten 12 days to make that happen. Not impossible, but a challenge for sure.

I had NEVER seen American Graffiti prior to last night. I know I'm supposed to be knocking out the long ones, but I convinced my wife to take in a movie with me and nothing that was long interested her, so we went with this. As the opening credits rolled, I had my phone in my hand, looking to see if Happy Days was a spin off of this movie - the appearance of Ron Howard and the drive-in known as Mel's got me to thinking it might be. I then realized that "Mel's Diner" was actually from Alice, not Happy Days. Anyway, if you're looking for the plot of American Graffiti, think Dazed and Confused, just set a decade earlier. The whole film is like one, really long music video, as there is 60s era music blasting throughout, almost the entire movie. The whole thing takes place the night before two recent high school graduates are about to depart for college. Curt Henderson (Dreyfuss) isn't sure if he even wants to go to college. He thinks that sticking around his native, California home and perhaps, getting a job, would be his best bet. On the other hand, Steve Bolander (Howard), is more than gung ho to head east and even discusses with his girlfriend, Laurie (Williams), the possibility of dating other people while they're separated. You've also got their other two pals, John Milner (Le Mat), a bad boy, racer and Terry "the Toad" (Smith), your classic nerd. The film takes place from dusk till dawn and is your classic coming of age comedy.

It's not that I disliked the music of the era, it's just that I wished they'd have given me a break from it during the course of the movie. I suppose most will argue that the music is something that sets American Graffiti apart from other movies and really gives it the feel of 1962, but I personally didn't care for this tactic. As it pertains to everything else, I just don't think I ever really felt a connection with these characters. It's as if they were from a different world, a different country. I realize this is a slice of Americana, but it's not a slice that I'm familiar with and perhaps my dad could get nostalgic watching something like this, but I felt like a stranger in a strange land. The characters seemed perfectly well developed, it's just that I never really found myself caring what happened to them one way or another. Would Curt find his girl? *meh* Would Laurie and Steve end on a happy note? *meh* Would John get arrested for soliciting a minor? *meh* It was a perfectly fine movie and I could see where all the hype was coming from, it just wasn't entirely for me.

On the other hand, it does take place over the course of one night and I think it's well documented that I'm a sucker for that. And while I did feel a certain strangeness in this era, it did make me wish I was a little more active in my own high school life. I was definitely as anti-social as they come and when it came to school dances, football games, after school gatherings, etc., I was nowhere to be found. It made me realize that I missed out on a real right of passage, as far as being an American teen goes and that's staying out all night, hanging with your buds, listening to music, savoring your youth before going off to participate in the real world. Clearly this was a big influence on Richard Linklater and his film Dazed and Confused and I'd call it an equally good predecessor.

RATING: 6/10  Not terrible or anything, but I really thought I'd like it more. Perhaps on more viewings, because I certainly wouldn't object to trying this one again someday.