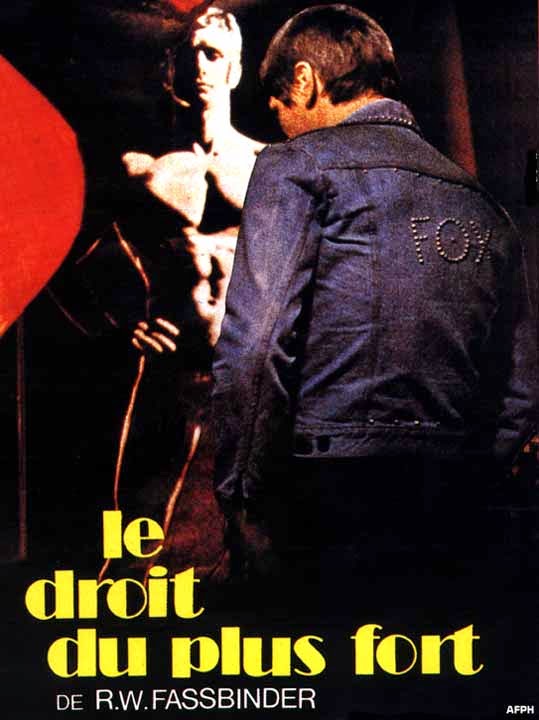 I've somehow managed to dilly-dally away my whole weekend and here it is my Sunday (I'm off every Tuesday and Wednesday) and I've managed to only watch one movie since getting off work Monday afternoon. Shame on me. But hey, at least it was a good one, as Fassbinder Week rolls on... 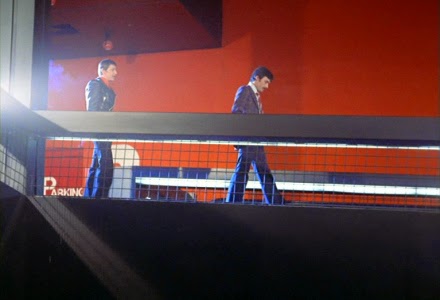 Franz Bieberkopf (Fassbinder) a.k.a. Fox is a carnival performer who has just lost his job. He's known in the circus world as "Fox the Speaking Head", but now all that concerns him is getting ten marks so that he can buy a lottery ticket, of which he's sure he'll win. He meets up with Max and devises a quick con to swindle ten marks out of an unsuspecting florist. Max (Bohm) gives him a lift to the store, just as it's closing and with a little begging, convinces the shopkeeper to sell him the lottery ticket, which he subsequently hits and wins 500,000 marks. Now he hangs out at Max's on a regular basis and through Max meets Eugen (Chatel), whom he's attracted to. The two go back to Eugen's place one evening, wind up sleeping together and voila, Fox is in love. The only problem is that the two come from entirely different backgrounds, as before Fox hit the lottery, he was poor (hence having to con the florist out of the ten) and Eugen and his circle are of a wealthy, upper class. From here, Eugen tries his best to transform Fox into what he considers to be a mannerly, tout worthy boyfriend, to partial success. When Eugen's father's business threatens to go belly up, Eugen devises a plan to scheme Fox out of "some" of his money, taking him for 100,000 marks which Fox is happy to pay, considering he loves Eugen. Moving on, Eugen develops a condescending, downright snobby attitude toward Fox, speaking down to him every chance he gets, yet still taking him for as much money as possible. After the 100,000 that goes into the business, Eugen continually thinks up new things that the couple need: a swanky apartment, a new car, new clothes for Fox and after an argument, a vacation - Fox, of course, paying for everything. 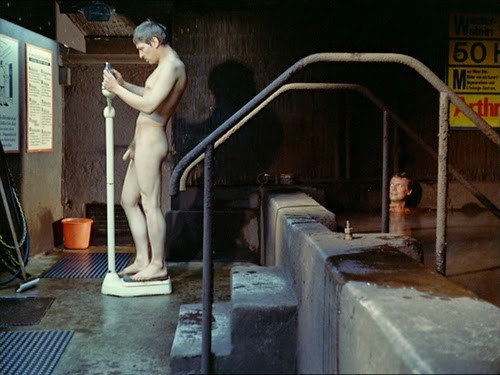 I started this one night last week, but my dog managed to sabotage me, as he wasn't feeling to swift and kept needing to go out. After a while, I got too tired to care anymore, shut the movie off and went to bed. From there, I managed to find The Bitter Tears of Petra Von Kant on YouTube and decided I better put off "Fox" until later, in case "Petra" were to be taken down. Anyway, I can tell you I wasn't too thrilled with what I'd seen (probably a half hour or so) that night and therefore, wasn't particularly looking forward to giving it a second try. Boy, was mislead. The film is filled with themes of class and sexuality, yet is very accessible to even the most untraveled movie watcher. The plot is pretty basic and throughout, we're forced to feel for Fox and side with him. There's actually a very clear line drawn of whose side we should be on and it's really some basic, yet really great storytelling. You get the sense from watching his movies that Fassbinder doesn't believe in love. In this and "Petra" we see two very one sided relationships, with one member of each relationship having a clear upper hand. It's funny and even THE BOOK notes that during their initial meeting, Fox is the alpha male. Note how he throws his clothes all over Eugen's apartment and jumps into his bed without even an invite, not to mention his somewhat over confident attitude. We can note these same exchanges in the initial meeting of Petra and Karin in "The Bitter Tears...", as Petra is the rich and Karin is the poor and Petra tells her all about how she'll make her a model and take her to the top. We see Karin look on with wide eyes and naivete, with the clear upper hand going to Petra. Now, as both films progress and as both Fox and Petra have the upper hands, as they fall deeper and deeper in love, they submit that upper hand to their "lover". Perhaps Fassbinder is trying to tell us that love will make you weak, especially when you give it to someone who doesn't return it. 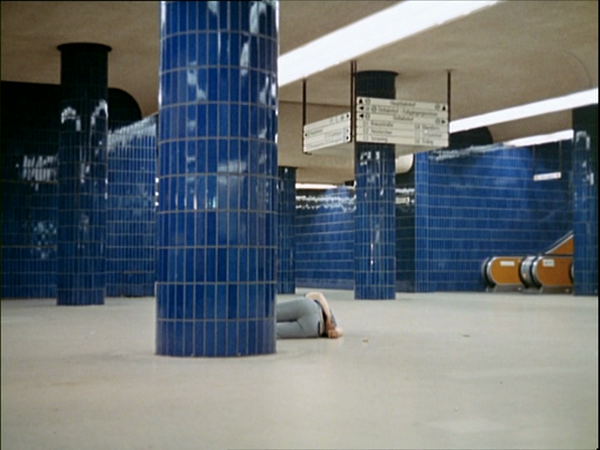 As I watched and got deeper and deeper into the film, I kept wondering how it'd all end. I have to say the ending was pretty perfect: Fox having given EVERYTHING to Eugen, except a few spare marks, spends his last night sleeping in his car, before overdosing on valium and dying in the subway, only to have his pockets picked by two youths. I have to ask though, what were Max and Klaus doing together? Was there something there that went straight over my head, a relationship that was eluded to earlier that I missed, perhaps? I was kind of confused by that. I also really loved Fassbinder in this too. What is it about director's in their own movies that always somehow seems to turn out good? Perhaps it's because they know exactly the performance they want and how to deliver it - yeah, that must be it. I was totally taken by him in this and those littler mannerisms he'd deliver when Eugen scolded him, bowing his head a bit and somehow perfectly portraying a temporarily broken hearted man. It only served to side me more with him and oppose me more to Eugen, which is, I'm sure, the intended reaction. Oh and how about that apartment the two had? The spiral staircase, the balcony with the grand view and that marvelous bed with a cherub printed on the foot board - hell, it even had orange carpet, something that for some reason I always think of when I think of old style apartments. Anyway, it was awesome and I kind of wanted to live there, but no with these characters.

RATING: 8/10  Probably just sneaking into '8' territory, but an '8' nonetheless. This one had much more life than "Petra Von Kant" and even the characters had more personality. However, you have to give the dialogue point to "Petra". Both great films and I can't wait for the other two.