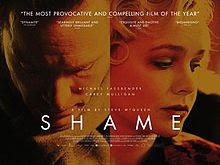 Last night, I assumed my usual position - in front of my flat screen, kicked back and in full, movie watching mode - and finally got a chance to check out Steve McQueen's second feature film (of 3 total), Shame. I've actually been wanting to see this one for a long time now, especially after seeing and loving Fassbender in Steve Jobs & Fish Tank and after seeing 12 Years a Slave, as a prerequisite to McQueen's work.

The film is - plain and simple - about a sex addict. The addict is our main character, the addict is portrayed by Michael Fassbender and the addict's name is Brandon. Brandon is a successful, New York City executive, who lives alone in a trendy NYC apartment and who gets around with the ladies, thanks to his good looks and prowess in the sheets. Brandon isn't above paying a prostitute for sex and in fact, one might argue that he prefers it this way - as love and intimacy are not his strong suits. From the get go, it is established that Brandon has a sister - Sissy (Mulligan), whom we first meet via answering machine messages, urging her brother to PICK UP, PICK UP, PICK UP. Brandon ignores the calls - ignoring her on one occasion, in favor of masturbating in front of the computer - and one day he arrives home to hear the stereo in his apartment, turned up full blast. Sissy has arrived, in lieu of waiting for permission to visit. She reveals that she doesn't have a place to live and Brandon agrees to let her have the couch...temporarily. One thing leads to another and about twenty or so minutes of screen time later, Sissy is sleeping with Brandon's boss, David (Dale) - who is also a close, personal friend of Brandon's. Brandon isn't thrilled with the way things have developed, but he ignores it, as he turns his attention to a co-worker of his, whom he has the hots for. The thing is, however, is that Brandon isn't used to having a crush, instead opting for quickies with girls he meets in bars and sex on delivery, via hookers - not to mention constant masturbation and porno perusing. So when he actually makes a connection with the aforementioned co-worker, Marianne (Beharie), he's out of his comfort zone - which becomes evidently clear a little later into the film and certainly into spoiler territory, so I digress, until after the break...

In fact, while I call him an addict three times in the first line of the above paragraph, it isn't really made evidently clear that he even is an addict, until very late in the film - something that maybe, even subconsciously, kept me from being blown away by this picture. My point is this: Let's say you go into this film 100% blind - no trailer, no previews, no plot synopsis, no Netflix sleeve to read and see what the movie is about - then at what point do I realize that I'm watching a film about sex addict and not just a film about rich, playboy who likes sex? I mean just filming segments with him handing hundreds to prostitutes & telling them to take their clothes off slowly, doesn't necessarily make the guy an addict, does it? Even the blonde we see him mingle with in the bar and later hitch a ride from and ravage under a bridge, isn't a girl he pursues, but rather, she pursues him. Sure, the constant masturbation was a hint, but was it enough to convince us of the facts of the film? Perhaps it was when we found out his hard drive at work was infested with porn? A definite game changer from just a casual sex lover to someone who has a clear problem. But, perhaps we're supposed to be left in the dark and perhaps, Brandon himself doesn't even know. They say denial is the defining personality trait of an addict and I'm willing to bet that the Brandon character didn't classify himself as someone who didn't have control. I'd say the point in the film where Brandon finally sees the light and where the audience can be clearly convinced that, yes, this guy has an issue, is when he can't get aroused with Marianne. Because at this point, we can discern that he's definitely addicted to sex - no question. If he's just a rich, playboy then there's no reason he can't "get it up" for Marianne. The reason Marianne does nothing for him, is because he isn't aroused by love, intimacy or romance. What he is aroused by is the dirty, the taboo, the forbidden acts. I'd say this is also where Brandon, himself, realizes that he has a problem, sitting alone in a hotel, staring out water, into the skyline - pondering exactly what is up with himself.

From here, we see a bevy of scenes that help us to continue to collect facts about our main character. These scenes work to hammer home any doubts that we were dealing with an addict, as opposed to just a guy who likes sex. When he's denied entrance into a nightclub, he goes across the street to a gay bar and is given oral sex by a man. Following that he has a rousing three way sex bout with two women. At this point, Brandon himself realizes what he is and for a moment, chooses to embrace it. He's almost looking to spite himself here, probably disgusted by his own actions but finally realizing that it's going to take disgusting acts to satisfy his needs, he goes whole hog. Later, a scene of Brandon crying in the rain, could be him realizing the error of his ways and a need to change. We never find out, however, because the film is left open ended. Yes, as irksome as it is, we don't get an ending...but if you read past the spoiler line, I'm not telling you anything you don't already know.

But really, how could you have ended this? You either let the character continue to be an addict, carrying on his destructive ways and send the audience home, probably feeling a bit slimy. The other option is to cure him, send him whistling off to work, with his dick in his pants, a neutered, abstinent, new man, ready to try a relationship with Marianne and that would've just felt too tacked on. So you leave it open ended and you let the audience decide whether they want to feel slimy or coddled. I guess I'm of the opinion that he's not cured. I feel like the temptation would be too great and while a good cry fest in the rain is good for a lot of things, I don't think it's strong enough to cure his problems, unless it was raining saltpeter.

From a technical standpoint, there isn't a lot wrong with Shame. Fassbender is fast becoming a favorite actor of mine, prompting me to add Hunger to my Netflix queue immediately and peruse his filmography to find other gems that have promise. The films main score by Harry Escott is powerful and fits in, calling to mind a desperate man, clutched by something almost demon-like. It calls to mind a group of friends who see a friend drowning, yet just can't save him - except Brandon is a loner, with no real friends, and that makes it even more dire. The main theme (titled "Brandon") makes me feel like there should have been a scene with Brandon just screaming into the heavens, it's that kind of powerful music where you just feel like the pains of the characters need to be exercised to accompany it. Keep your eyes peeled for key scenes, including a beautiful tracking shot of Brandon taking a jog at night, while blaring classical music and another of Carey Mulligan belting out the saddest version of New York, New York you'll ever hear. Speaking of Mulligan, I barely touched on her character, Sissy, who is almost as complex as Brandon, if not moreso...

What is the general consensus regarding her relationship with Brandon? Was there a bit of incest there, in a previous life. There was this quiet, loving awkwardness between them that seemed to suggest so, not to mention the fact that when she first appears, she stands naked in front of him, without even trying to cover up and him, not trying to avert his eyes. There's also a phone message that she leaves him, that says something like "We're not bad, we just come from a bad place", that seems to hint at possible sexual abuse, which could definitely account for Brandon's intimacy issues. Because I'm not a real film critic, I will pose a question though, instead of spending the entire review trying to pretend like I know all the answers. What was the point of her suicide? Did it serve merely as an eye opener for Brandon, to make him realize that there was someone out there who truly DID care about him and whether he wanted real love or not, he was going to get it - even if it was merely sisterly. The crying could be a result of him finally feeling LOVE for the first time in a long time and makes you realize that if he'd been able to maintain an erection for Marianne, then he'd probably have cried for her too. See there...I just answered my own questions. Perhaps a good cry in the rain did cure him, perhaps Sissy slitting her wrists because he refused to reciprocate her love, proved to him that she loved him and that he didn't need the actions of a hooker or a quick jerk to FEEL, he had a perfectly good sister who was willing to substitute his lust with actual, living, breathing emotions.
I will say though, the fact that they prefaced Sissy's suicide with a suicide on the subway was kind of hokey, was it not? That's just me nitpicking though.

RATING: 8/10  I talked so much that I talked Shame from a '7.5' into an '8' and that's always cool when that happens. Definitely one of the most powerful films I've seen in a while and it makes me wonder with THE BOOK felt the need to take it out of THE BOOK.