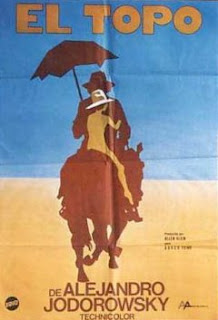 When flipping through the book, prior to my last hiatus, I came across the entry for "El Topo" and just by looking at the picture of Alejandro Jodorowsky in his El Topo gear, I wanted to see this film. I took a break before I could get to it, but when I restarted my Netflix account this month, I made sure that I'd receive it in my first batch so that I could check it out.

The film starts with El Topo (A. Jodorowsky) riding across the desert, dressed in all black, riding a black horse. A child is with him, whom we can assume is his son. He instructs the child that since he is now seven years old, he is now a man and must bury a photograph of his mother and his favorite toy. Once the boy buries his possessions, the two continue riding through the desert and eventually come upon a town. There they find the residents massacred, the animals massacred (including horses with their entrails falling out) and in the buildings they find people hanging from the ceilings by their necks. They find one man still breathing and able to speak, who tells them that the perpetrators have fled to a nearby monastery. El Topo hunts them down and kills them and their leader, a Colonel. It is here that El Topo leaves the boy in the hands of a group of monks and takes with him a woman, whom he names Mara. From here, El Topo is told that he there are four master gunslingers living in the desert and that he must find and defeat all of them to become the greatest gunman of all. El Topo accepts his mission. The four gunslingers each represent SOMETHING (a religion, I suspect) and together with Mara he rides to duel with each of them. This is really only half of the film, but to even try to get into anymore would be too much of a headache for me...and you. 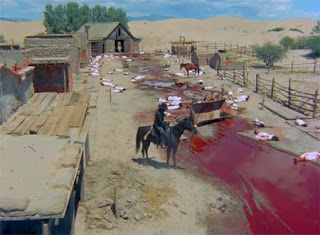 I'm not going to sit here and say that "El Topo" was a garbage film, filled with sex, violence and sacrilegious imagery and something that I really regret having to watch to continue my journey. I won't say that because it isn't true and in fact, I've watched worse for this journey. Take "Salo" for instance, which was far more gruesome in it's imagery. Actually, "El Topo", at times, reminded me of Fellini's "Satyricon", a film that I didn't hail when writing about it, but one that has since grown on me and one that I look back on as an utterly fascinating experience. However, did I like "El Topo"? No, I didn't. Honestly, it falls under that often used category of "not for me" movies. The film, above all else, is about religion (or at least that's my perspective), as Jodorowsky's El Topo character is forced to duel with four men, each representing a different belief. Yes, I believe in God, but I really don't like a lot of religion in my movies (see my Ingmar Bergman reviews). In the trailer for "El Topo", the narrator claims that "El Topo is not about religion, for it contains all religions". Well then that would make it an apex film on the subject of religion, wouldn't it?

By the time this movie was over, I honestly couldn't tell if Jodorowsky was a religious man and his film was meant to justify his beliefs or if he was an atheist and his film was meant to mock other people's beliefs. And on top of all the religious talk there was an awful lot of symbolism, something that got much more thick in the second half. On top of the symbolism and religion, the film was very surreal and I feel like if I had brought a bag full of marijuana with me to watch this movie, then we'd be talking about the #1 film of my next TOP 20. I can say, however, that I was never bored. I watched the screen intently, soaking up the images, listening to the actors and trying to put together the Rubik's cube that was "El Topo". The images actually were quite mesmerizing at times. A scene where one woman splits open a cactus plant and licks through the inside, to symbolize her sexual desire for another woman was quite...intense? (not sure if that's the word I'm looking for). If you want a one sentence explanation of what "El Topo" is all about, chew on this: "El Topo" is what would happen if Federico Fellini made a spaghetti western. Now, I actually like Fellini and my dabbling with spaghetti westerns several months ago was a highly positive one. However, I can't say that the two mix very well. We'll leave it at that.

RATING: 5/10 Let's just call it right down the middle. I have a hard time saying that this was a bad movie, because there was obviously SOMETHING there that had appeal. However, in the end it just wasn't my cup of tea.